Skip to content
Imagine my surprise when my Traveling Companion wanted to try the zoo again. We made an earlier start of it, used a less circuitous route, and really found it this time. Arriving in the early afternoon, we found the zoo to be almost completely deserted.  Admission was surprisingly high (16€ each). One of the many reasons I loved going to the St. Louis Zoo when I was in high school (other than the obvious reason that I had friends who worked there) was that most of the zoo was free. It was the best people-watching in all of St. Louis.

The Barcelona Zoo has pony rides, a children’s train, and even golf carts you can rent. They also have a candy store and several spots to buy a beer.  They have both kinds of camels, fighting flamingos, meerkats and too many parrots. Many animals behaved in a way that made us think that they’ve been fed by people looking at them; most turned and looked at us, and others walked right up when we approached.
The genuine treat of the day was that they have three kinds of vultures: a large sociable colony of Griffon Vultures, a pair of Black Vultures, and my Traveling Companion’s favorite bird ever, the Bearded Vulture.
The gorgeous solitary Bearded Vulture we saw had taken up a spot in its new enclosure where it could survey its entire cage and still see all the way to the tables of the snack bar. I took three pictures of it, and despite the fact that I could see its face almost the whole time we were there, its head is completely turned away from me in each shot. This bird lives on skin and bones and marrow and tendons, with a pH of 1 in its stomach.  They have been observed dropping bones from a great height to break them open. 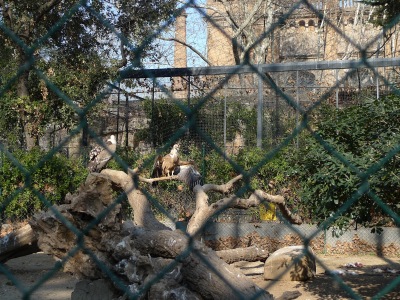 The Griffon Vultures had just been fed, and there were beheaded rabbit carcasses strewn about their enclosure.  Griffon Vultures are very expressive birds, with downy tan fuzz on their heads and on their long, curved necks. There was also some gentle squabbling over the best spot on a perch and plenty of cantering over the ground. These vultures have a ruff of long, thin feathers which float about their thin necks like a fancy collar, and long flat feathers that hand around their legs like culottes. Certainly this is the best-dressed vulture I’ve ever seen.  We observed several individuals spreading their enormous wings to stretch.  Suddenly one lifted into the air and had a quick flight across the enclosure; in the large Doñana Aviary next door, the Eurasian Spoonbills rose in agitation. The other species were quiet, unmoved by either the swoop of the great vulture or the excited circling of the spoonbills.
The house we are renting has large windows, and the windows want washing, inside and out.  First I wasted a whole bottle of Windex and a whole roll of paper towels, having poked around in the closets looking for a proper squeegee, and finding none.  The dogs watched me going at the windows the whole time. I thought I was being interesting. It was the deer in the yard, though, that was the interesting part, and as I came in, out went Captain for a long, deer-chasing romp.

Later, I made for the closest hardware store I know of, in the near-ish town of Cross River. The hardware store makes keys, sells paint, and has the parts of your running toilet that will make it stop running. Like so many of the small hardware stores you find in strip-malls, it’s packed to the rafters with merchandise. I always find that you walk in and ask the guy behind the counter. Don’t bother looking for yourself. I was shown a few options, and picked a squeegee for which one must provide a handle. The clerk found a couple of possibilities for the pole, none of them perfect, but he did secure the pole to the squeegee with a screw, charging me for neither the pole nor the screw. Along the way, I got a bit of history (the upstairs of the store used to be the screening room of the old movie theater), and some predictions for snow this winter.
In Westchester County, deer (and black bear) can be hunted only by bow, and the season is from October 15thto December 31st. I have already met one man who has permission to hunt on this land.  The deer here are certainly plentiful, and a danger to motorists. I see them every morning when I walk the dogs to get the paper, all day when I look out the windows, every afternoon when I walk the dogs on the road, and every day when I am out driving.  There was a large doe killed recently on Cat Ridge Road, where I walk.  One of its hind legs was broken in the accident, and stuck out from its body at a disturbing angle. It happened on Friday night, and the carcass had been removed by Monday midday. Scavengers had only just started to make progress on it.

The deer here in Westchester seem well adapted to seeing people and cars and trucks, and give everything a good, long, dumb stare before walking or running away.  There is a group that I have seen grazing dully at the margins of the Taconic Thruway near Lagrangeville. The speed limit is 50 mph, but many people seem to take that as a polite suggestion, like flossing daily or changing your smoke-detector batteries twice a year. The one thing that seems to make deer try to leap high and run fast is my knuckleheaded dogs; they charge at deer, barking furiously in frustration, running as fast as they can with no plan for maneuvering over the stone walls that the deer hop over without much visible effort.  Maybe if deer made more noise I would respect them more.
My landlord informs me that he likes seeing the crows and ravens and vultures and eagles that come if the bow hunters leave the entrails after gutting a deer.  As a dog owner, the possibility of my dogs getting into rotting deer entrails is pretty scary, but it is not nearly as scary as the prospect of preventing any and all Vizsla escapes from October 15thto December 31st, from dawn to dusk.  I am pretty sure that Vizslas look as much like white-tail deer as any dog can.