What I saw: Captain having the new dog toy.

What I did beforehand: the Bacon Provider got home from a business trip in time to catch a late dinner with me. Then, he had to unpack (and re-pack) his suitcase.

What I wore: dirty jeans and the sweater of intermittent self-pity

Who went with me: Captain and the Bacon Provider and even Schwartz. 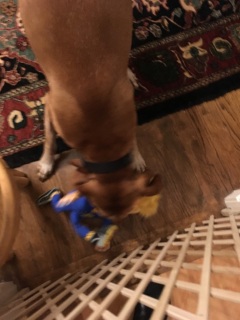 How I got Captain: we took in Captain as a foster dog in the fall of 2008.

Why I saw this show: a colleague of my husband who I met on election night gave him a gift, saying it was “for his dogs.” 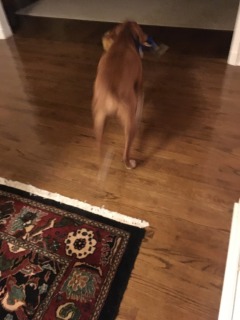 Where I sat: on the floor because I didn’t want to miss any of it.

Things that were sad: that this made me feel better.

Things that were funny:

Things that were not funny:

Something I ate: toast.

What it is: a stuffed dog toy of ordinary durability, in the grip of a dog that is determined to rip the face off of every toy, empty out the stuffing, and pull out the squeaker.

What I saw after: Schwartz made his inspection.