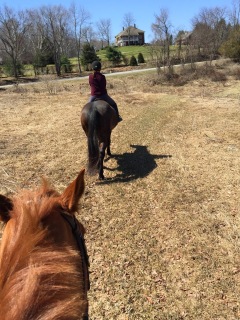 The road was quiet. There is little shoulder to ride on, but not much in the way of traffic. The last time we went this way we turned off the road and a flock of unexpected birds had flown out of a building, startling Mars. Now, he walked calmly but carefully past the spot of prior alarm. There is plenty for a young horse to look at on this route, crossing two bridges over the Shekomeko Creek, winding around old buildings, cornfields, and small piles of decrepit farm debris, down several residential streets. We’d done the ride recently enough so it wasn’t completely new to Mars. The only new part was going to be the trail through the woods.
When we reached the woods, the beginning of the trail looked like it had been cleared quite recently. It is wide enough to ride abreast. But once we were in, we encountered a fallen limb of the kind that we couldn’t just step over (too many sharp and pointy bits sticking out). W—- hopped off Jenny to clear the branch, and having done it, stayed on foot in case there were more.
And, there were more.
Every fifty yards or so there was a tangle of fallen branches. Some were easier to clear than others. The woods here are a mix of deciduous trees, mostly, with a few long-needle pines, and many thorny bushes and climbing vines. By the third obstacle, W—- needed both hands to try to budge the mess, and she had to hand me Jenny’s reins which I held while I sat on Mars. I was focused on watching her, keeping Jenny and Mars a safe distance apart, and staying relaxed.
At the deepest point of the trail the ground falls away to the left, revealing that we were riding atop a steep, wooded hill. There was barely room to hold Jenny and keep an increasingly uneasy Mars out of the sticker bushes. I don’t think X— was feeling entirely ok about the terrain, and before I got a chance to look, I heard X— behind me make a noise.  I turned to see him standing on the ground next to the gray mare, running up his stirrups.
W—- called out to ask if he was ok.
X— said he was fine, but he said his horse wasn’t having it.
Horses can read your mind, of course, which is why people who are terrified of horses rarely learn to ride. Horses can feel your anxiety through your seat and hands, and, as prey animals, they take it seriously. Maybe you know something they don’t about lions or bears.
At this point, Mars checked the mare ahead of him and the mare behind and surmised that he was the only horse with a rider still mounted. Mars gave a pugnacious buck, popping into the air and kicking both hind feet out. This was my cue to get off as well.
W—- asked it I was ok.
I said I was fine.
She said, “Next time, when we get to a fallen tree at the beginning of the trail through the woods, remind me that there will be more and we should just turn around.”
We were not far from the end of the wooded section. The trail leaves off at a spot with a nice view, from the top of the hill to the south. Winter’s straw-colored hills are now washed with pale green, though the trees are still as bare as bones. We found a large rotten log for remounting. We all got back on, including X— who picked himself up and mounted his horse from the ground. Descending the hill, Mars finally let out a breath.
And then we rode home.

The event I described happened in mid-July, and on that day I told the people I was with that I would write the sheriff and the county executive. They laughed. On a different day on that same stretch of road, my young horse spooked at a speeding garbage truck, dumped one of the barn’s professionals on the ground, and took off galloping back to the barn. He stopped and we were able to catch him.
Recent events all across the United States involving police remind me to encourage you, dear readers, to write letters to your local law enforcement and their bosses if you have an opinion about what you see them do.

Marcus J. Molinaro
County Executive
County of Dutchess
22 Market Street
Poughkeepsie, NY 12601
Dear Mr. Molinaro:
Thank you for your kind letter welcoming me as a newly registered voter in Dutchess County. I look forward to participating in elections in my new rural community.
Recently, on a July weekday in the mid-afternoon on State Route XX in XXXXXX, I was out riding my horse on the road’s shoulder along with two other younger staff members of the barn where I ride. We were each wearing a helmet and riding a calm, older horse belonging to a private owner. An unmarked police vehicle approached and turned on its brightly colored lights and passed us, at an alarming speed. Because we are all experienced riders, we were able to calm our horses and continue; however, almost immediately the unmarked black police vehicle was joined by a marked Dutchess County Deputy Sheriff’s car, and passed us from the other direction at even greater speed.  Once again, we had to calm our horses and continue, which we did without further incident.
I have mulled over the encounter during the last couple of months and taken the time to confirm for myself that under Article 26 of the New York Vehicle and Traffic Law, Section 1146 a., “Every driver of a vehicle shall approach a horse being ridden or led along a public highway at a reasonable and prudent speed so as to avoid frightening such horse and shall pass the horse at a reasonable distance.”
I believe that the drivers of both police vehicles, though they may have been responding to an emergency, failed to obey this law, endangering the lives of three people and three horses.
Should any staff members of the Dutchess County Sheriff’s office be interested in learning about basic horse safety, the barn where I ride is a British Horse Society Certified facility, with highly educated and experienced instructors who would be able to provide basic lessons in horsemanship. I would think these skills would be useful throughout much of Dutchess County.
Thank you for taking the time to read this.

Despite the mounted NYPD officers who house their horses at a facility in Chelsea and the carriage horses in Central Park, there are no horses in Manhattan. As a horse owner, this meant that moving to New York City was a compromise for me. I drive a long way upstate to ride these days, so I ride less, and this is yet another reason to add to my growing list of things I hate about New York.
No doubt the first humans to ride horses did so without much tack, if any at all. I envision a clever tribe of hunter-gatherers realizing that the nearby horse herd had a few slightly more docile individuals, and though delicious to eat, those slightly more docile individuals made suitable mounts, opening up wondrous new hunting possibilities for the primitive people. Once enlisted to carry home huge carcasses, the domesticated horse made the great leap forward from food to engine. Today, modern America has few true working horses, but not none. Most American horses are kept (at great expense) for the pleasure of their owners.
To ride even casually requires an initial investment in a helmet and boots, so many new riders, like me, go to a tack store before they even take their first horseback riding lesson. What this means is that before even going to the barn the new rider goes shopping. In rural areas, you can find a helmet and riding boots at a feed store. But in a fancy suburb, you can go to a real, fancy tack store.
Back in Seattle, this was Olson’s. You walk in and are immersed in the whole horsey lifestyle. They have all the stuff for horse care (from hoof picks and vet-wrap to pitchforks), but also everything for the rider (attire, boots, and saddles).
Olson’s sold us our first helmets and boots.    Within a few weeks we had also bought breeches (riding pants) and half chaps there.   Even before we were known regulars we were greeted enthusiastically. Eventually we found ourselves treated like very important customers.   Everyone knew our names.
When I bought my first horse, I went with my trainer to Olson’s and she showed me everything I needed to buy; it was a long list.  Later, I would go there for a bottle of hoof oil and leave with a bottle of hoof oil and new clogs.  When a store cultivates a relationship with the customer, you go back for little things, and you order special things from them when you could just as easily go online.
One of the surprising things about moving to North Dreadful last year was discovering a large fancy tack store there. Today, on my way back from the barn, I stopped in for a couple of things. I have been to this tack store a few times; I have made major purchases there. I am never greeted by name.  I don’t think they even notice when I walk in; I always have to ask for help. I usually leave without everything I was looking for, and I never, ever buy anything on impulse.  This store makes me very sad, because it isn’t Olson’s. I miss Olson’s.
Because I had stopped at the tack store, I hit rush hour traffic coming into Manhattan and added another hour to my commute. Next time, I’ll buy whatever I need online.