What I saw: “Eclipsed,” a play by Danai Gurira at the Golden Theater on W 45th

What I wore: the same thing I wore this other time except I got sweaty walking around and had to change to a black blouse

What I did beforehand: ate 13 slices of manchego and a handful of peanuts

Who went with me: a particularly grumpy Bacon Provider

My husband is with me in person but … #neverstopsworking

How I got tickets: online, full-price

Why I saw this show: I read good things about Danai Gurira’s plays, and thought that I might dig an all-women cast; I did. Now, I have been reading about Liberia and am on the lookout for a good book written by a Liberian author.

I am sitting among people who know each other & happened to run into each other. Apparently these are crazy times for women filmmakers in NY

Where I sat: front row, center, amongst some east and west coast arts administrators. At intermission, the man closest to me asked the woman he was with if the child seated next to him was a boy or a girl. I did not hear her reply. The child had a dark-blonde, dyed mohawk, and a couple of earrings and was with the couple on the end, from L.A. Why, I wonder, did he need to know. 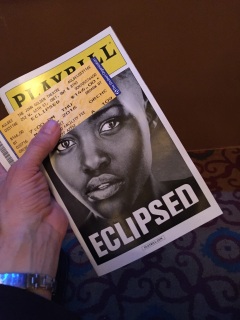 Things that were sad: This play features five women enduring civil war in Liberia, and though the word “rape” is used infrequently, it is central to everything that happens.

Things that were funny: Wife #3, cunningly played by the effusive Pascale Armand, is tragically hilarious, irresistibly complaining, and deliciously deceitful. She is my favorite female character since I started the “I saw” project.

Things that were not funny: I mean. I think Liberia was dreamed up as a solution by early American white supremacists as a place to send freed slaves. Their constitution and flag are modeled on ours. Maybe they were never colonized, but their recent civil wars spanned 14 years. Today’s Liberia is notable for its low literacy rates (33% among women), very high risk of infectious disease, lack of sanitation and clean drinking water, high infant and maternal mortality, and short life expectancies. This play dramatizes how rape was deployed as a weapon against women in wartime.

What it is: a play with one, fifteen-minute intermission, with a strong cast, including an Academy-award winning actress.

What I saw on the way home: On the next block of W 45th, the sidewalk was too crowded for us to make headway; the audience from “Kinky Boots” was spewing from a theater. So, we walked in the street.