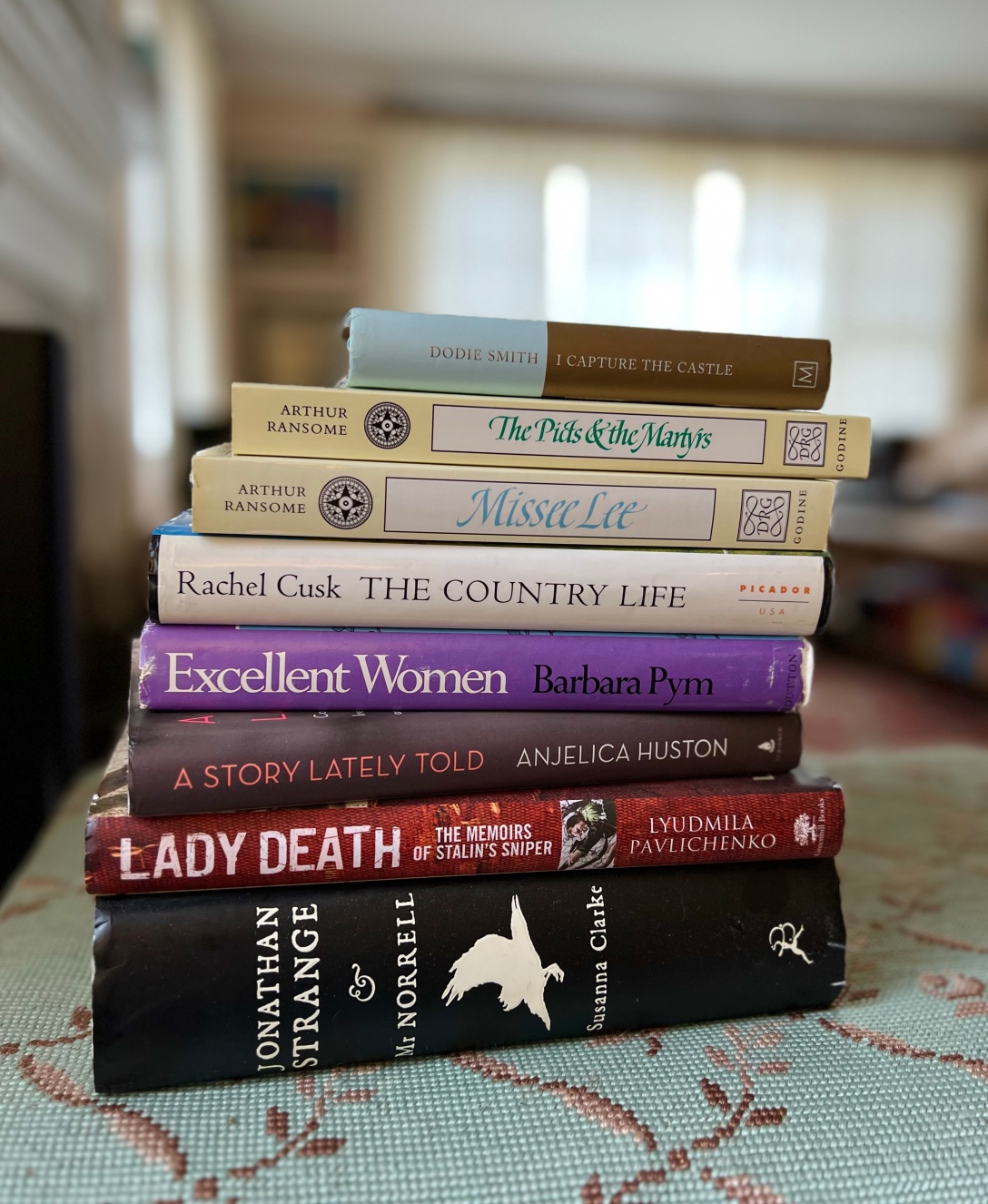 January 2022
The 1619 Project, by Nikole Hannah-Jones et al
The Bean Trees by Barbara Kingsolver
Offshore, by Penelope Fitzgerald
The Ten Thousand Doors of January, by Alix E. Harrow
The Big Six, by Arthur Ransome
The End of Everything (Astrophysically Speaking), by Katie Mack

March 2022
The Country Life, by Rachel Cusk
Intimacies, by Katie Kitamura
The Border Keeper by Kerstin Hall
The Spectator Bird by Wallace Stegner
Excellent Women by Barbara Pym
The Book of Form and Emptiness, by Ruth Ozeki
Missee Lee by Arthur Ransome

June 2022
A Thousand Ships, by Natalie Haynes
Bridge to Terabithia by Katherine Paterson
Tuck Everlasting by Natalie Babbitt
The Crocodile Bride by Ashleigh Bell Petersen
Corrections in Ink, by Keri Blakinger (my favorite book this year)
Sandra Newman’s The Men
Ursula K Le Guin’s The Word for World is Forest
I Capture the Castle, by Dodie Smith

July 2022
Anne of Green Gables by Lucy Maud Montgomery
A Children’s Bible by Lydia Millett
The Snow Child, by Eowyn Ivey
Fox & I: An Uncommon Friendship, by Catherine Raven
The Secret Garden, by Frances Hodgson Burnett

October, 2022
So Big, by Edna Furber
Anne of Windy Poplars, by Lucy Maud Montgomery
Nona the Ninth, by Tamsyn Muir
The Once and Future Witches, by Alix E. Harrow

November, 2022
Claire DeWitt and the City of the Dead, by Sara Gran
Fledgling, by Octavia E. Butler
Nettle & Bone, by T. Kingfisher
Anne’s House of Dreams, by Lucy Maud Montgomery

Perestroika in Paris, by Jane Smiley
Notes on a Silencing, by Lacy Crawford
The Custom of the Country, by Edith Wharton
The Face of War, by Martha Gellhorn
Brown Girl in the Ring, by Nalo Hopkinson
Gypsy, a memoir, by Gypsy Rose Lee
Strange Weather in Tokyo, by Hiromi Karakawa
Under a White Sky: the nature of the future, by Elizabeth Kolbert
Hamnet, by Maggie O’Farrell

Hamlet, by William Shakespeare
Death on the Nile, by Agatha Christie
Alice’s Adventures in Wonderland, by Lewis Carroll
The Yellow House, by Sarah M. Broom
The Girls of Slender Means, by Muriel Spark
The Cigar Factory, by Michele Moore
The Prime of Miss Jean Brodie, by Muriel Spark

Ducks, Newburyport, by Lucy Ellmann
The Ballad of Peckham Rye by Muriel Spark

The Copenhagen Trilogy, memoirs by Tove Ditlevsen
We Didn’t Mean to Go to Sea, by Arthur Ransome
The Sea, the Sea by Iris Murdoch

Sisters of the Vast Black by Lina Rather
Nobody will tell you this but me, by Bess Kalb
The Radium Girls, by Kate Moore

Daniel DeFoe’s A Journal of the Plague Year
Louise Erdrich’s new and terrific novel, The Sentence
Od Magic, by Patricia A. McKillip
The Blue Flower, by Penelope Fitzgerald

Here is a list of almost all the books I read (and finished) in 2016, in approximate order 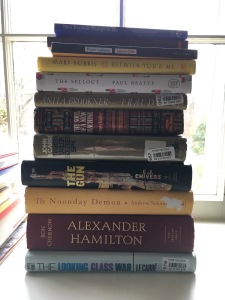 Raymond Chandler’s “The Big Sleep,” one of many books my brother recommended.
Raymond Chandler’s “The Long Goodbye,” because his dialog absolutely crackles with energy, and I couldn’t get enough of it.
Ron Chernow’s ponderous and highly illuminating “Alexander Hamilton”
Raymond Chandler’s “The Lady in the Lake”
James Salter’s exciting novel about fighter pilots, “The Hunters,” also recommended by my brother.
Raymond Chandler’s “Farewell My Lovely”
Matthew Thomas’s extraordinarily sad, “We Are Not Ourselves”
Mark Haddon’s “The Curious Incident of the Dog in the Night-Time,” because I was about to see the play.
Robert Stone’s terrific Vietnam-era novel, “Dog Soldiers,” also suggested to me by my brother.
Patricia Highsmith’s “Ripley Underground,” because I had read “The Talented Mr. Ripley” in 2015 and it had blown my mind.
J. G. Farrell’s “The Siege of Krishnapur”
Sally Denton’s damning portrait of Bechtel’s evil empire, “The Profiteers”
Patricia Highsmith’s “Ripley’s Game”
C. J. Chivers’s stunning portrait of the AK-47, “The Gun,” a book I highly recommend.
Neil Gaiman’s “The Ocean at the End of the Lane”
Andrew Cockburn’s “Kill Chain”
Marlon James’s “A Brief History of Seven Killings”
Andrew Solomon’s revealing, honest, and oddly undressing “The Noonday Demon: An Atlas of Depression”
E.L. Doctorow’s “Homer & Langley”
Mary Norris’s lovely memoir, “Between You & Me,” a gift from The Graduate.
Patricia Highsmith’s “The Boy Who Followed Ripley”
Andrew Solomon’s illuminating collection of essays, “Far and Away: Reporting from the Brink of Change”
Alan Bradley’s “A Red Herring Without Mustard,” third of the series of entertaining Flavia de Luce mystery novels
Edwidge Danticat’s “Brother, I’m Dying”
Julia Alvarez’s “In the Time of the Butterflies”
Maggie Nelson’s “The Argonauts”
Viet Thanh Nguyen’s “The Sympathizer: A Novel”
Gloria Emerson’s “Winners and Losers: Battles, Retreats, Gains, Losses, and Ruins From the Vietnam War,” from my brother’s Vietnam War reading list.
Patricia Highsmith’s “Ripley Under Water,” the last of the Ripley-ad
Maud Casey’s “The Man Who Walked Away,” because my brother asked me to.
Elie Wiesel’s “Night,” a re-read.
Hanya Yanagihara’s hard to read but ultimately redeeming, “A Little Life: A Novel”
Alan Bradley’s, “I Am Half-Sick of Shadows,” another Flavia de Luce novel.
Nell Irvin Painter’s “The History of White People,” which I highly recommend.
Alan Bradley’s 5th Flavia de Luce novel, “Speaking from Among the Bones”
Elizabeth Kolbert’s disturbing “The Sixth Extinction: An Unnatural History”
Colson Whitehead’s “The Underground Railroad,” less because Oprah said to and more because I read his weird book about schools of elevator maintenance, “The Intuitionist”
Philip K. Dick’s sci-fi classic, “Do Androids Dream of Electric Sheep?” also known as “Blade Runner”
Rebecca Solnit’s “Men Explain Things to Me”
Tim O’Brien’s “If I Die in a Combat Zone,” part of my brother’s Vietnam War reading list.
Another of Alan Bradley’s Flavia de Luce novels, “The Dead in Their Vaulted Arches”
Tracy Kidder’s “The Soul of a New Machine,” which made me nostalgic for the days when my husband was designing and building new computer devices.
Anita Brookner’s gently crafted and absolutely amazing, “Fraud”
Jeffrey Toobin’s readable but ungenerous portrait, “American Heiress: The Wild Saga of the Kidnapping, Crimes and Trial of Patty Hearst”
Jeremy P. Bushnell’s hipster adventure, “The Insides”
Maxine Hong Kingston’s admirable “The Woman Warrior,” again on the recommendation of my brother.
Sandra Cisneros’s warm “The House on Mango Street”
Betty Friedan’s groundbreaking, but single-minded and dated “The Feminine Mystique”
Ottessa Moshfegh’s “Eileen”
Laura Olin’s “Form Letters”
Yet another of Alan Bradley’s Flavia de Luce books, “As Chimney Sweepers Come to Dust”
Erik Larson’s “Dead Wake: The Last Crossing of the Lusitania”
D.G. Compton’s “The Continuous Katherine Mortenhoe”
George Plimpton’s “Paper Lion: Confessions of a Last-String Quarterback,” which I wish I had read after “Out of my League,” below, and not before.
John le Carré’s “The Spy Who Came in from the Cold,” probably at my brother’s suggestion
Robert A. Caro’s 1100+ page non-fiction epic, “The Power Broker: Robert Moses and the Fall of New York,” which I enjoyed every bit of, and came away finally understanding most (if not all) of the things I hate about New York. Highly recommended.
John le Carré’s “Call for the Dead”
Sady Doyle’s funny modern feminist look at women in pop culture, “Trainwreck: The Women We Love to Hate, Mock, and Fear, and Why”
John le Carré’s “A Murder of Quality”
Small-town journalist Tom Ryan’s book about hiking with his dog, called, “Following Atticus,” which I was asked to read by my sister in law. Dog books always have sad parts, and funny parts, and this provides the expected. I strongly object to his style of dog-rearing, though, and would like to go on the record as saying that carrying your puppy around all the time for the first month is a certain way to raise a very spoiled dog.
John le Carré’s “The Looking Glass War”
George Plimpton’s very funny baseball book, “Out of My League”
Tommy Wieringa’s chilly novel, “These Are the Names”
Paul Beatty’s tart racial satire, “The Sellout: A Novel”
Graeme Macrae Burnet’s grisly and excellent, “His Bloody Project”
Hope Jahren’s intimate and generous, “Lab Girl,” which I’d suggest you read this year.
And, lastly, John le Carré’s “Tinker, Tailor, Soldier, Spy,” another George Smiley novel, and probably my favorite of them.
Total Number of books, 67.
Total number of authors, 53.
20 of the authors are women, and I think 9 are non-white.