Skip to content
What I did: like you know, last year, a barn friend, S., invited me to join her on this trip to Florida to watch the winter circuit horse show, shop, and do sunshine; I was like, “Pick me,” but then couldn’t get shit organized at home. I have pets and sourdough to feed, don’t you know. This year, I said yes, and left the cat in charge.

What I did beforehand: you don’t have to leave written instructions for the cat. I figured the dogs would  let him know when they were hungry or needed to crap someplace other than the kitchen floor.
What I packed: sunscreen, gray jeans, white J. Crew linen swimsuit coverup, bathing suit, yoga clothes, three polo shirts, underwear and socks.
Something I packed and didn’t wear: a sun hat.
Something I ran out of: shirts.

Who went with me: S. and K. from the barn. S.’s friend D. joined us from Germany.
How I got tickets: online, from JetBlue, at the end of November.

Why I saw this show: I think S. wanted us to be able to see the FEI  Grand Prix CDI 5* at the 2017 Adequan® Global Dressage Festival in Wellington, FL, which we saw, in addition to the Grand Prix freestyle competition.

Where I sat: in the bleachers and in the VIP tent, because S. is well-connected through volunteer leadership work she does for the Jewish World Games. 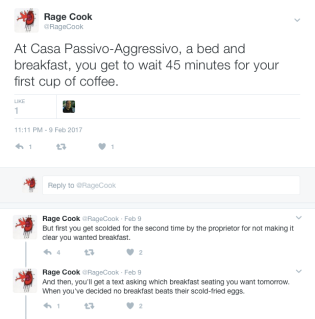 Where I stayed: at the Casa Passivo-Aggressivo, a bed and breakfast  in West Palm Beach which you should not confuse with the nearby Passivo-Aggressivo Bed and Breakfast, just a couple of blocks away. And don’t mention the confusion to your hosts, because the rivalry is old and bitter.

Things that were not funny: hearing S. explain that the Jewish World Games have been around since the 1930s and how Jews might want their own international sports competition, and, of course, why. She’s quite upbeat and polite. Then there was like this famous trainer who I met at a barn visit on S.’s World Jewish Games business, who was sure we’d met.

Things that were interesting: S.’s friend D. whispered to me all about what to look for in a correctly ridden and trained Grand Prix horse and told me that she thinks this one famous U.S. Olympic Dressage rider SP is an artist; he took third in both classes we saw him compete in.
Things that were sort of funny: K.’s connections got us seats at a super cool fundraiser where we were assigned to sit at SP’s table. I could only imagine myself saying something I would regret, so I didn’t have the courage to talk to him, but S. did. He was very nice, and so was his staff who also sat at our table.

Things that were not actually funny: a second snowstorm rolled into New York while we were all in Florida and our flight back on Sunday was cancelled. JetBlue sent us emails saying they’d re-book us, but we didn’t trust them to get us home in time for our obligations so we all scrambled to get back on the same flight only on Monday. By the time we heard from JetBlue, they’d booked us to leave several days later.

Things that were cool:  S. wanted a ride to the show grounds on a golf cart because she wanted to experience everything, and we got it on the bonus day. The benefit show featured a group that works horses at liberty, up to eight at a time. It was beautiful and exciting and I could hear horse people at other tables comparing the performer’s control over her herd to their own horses.

Something I ate: there were these short-rib empanadas being passed by a woman carrying a tray that we had to chase around the room.

Something I didn’t eat: breakfast at our B&B.

Who should see it: fans of dressage.
What I saw on the way home: the Atlantic Ocean, which is acidifying as a result of global warming. The last half hour of the flight was super bumpy because of a windstorm, but the flight attendant said they knew what they were doing so I just tried to close my eyes and deal with it. A woman in the row ahead of me whooped and commented about the bigger bumps. I wanted her to shut up. At least the kitchen floor was clean when I got home. 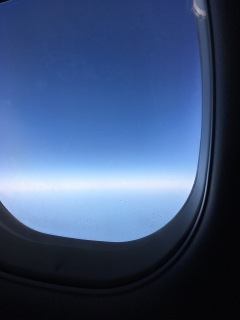 One of the pleasures of visiting a student at Bard College in New York is the opportunity to stay in a nearby bed and breakfast. While Bard is not located within any town, it surrounded by small towns with bed and breakfasts we’ve enjoyed like the Red Hook Country Inn, and The Inn at Hudson. This time, I called a new one, and finding it full, I made the mistake of asking for a recommendation and trusting the advice of the man on the phone.

He suggested the Gaslight Inn, in Red Hook. It is on Route 9, on the west side of the road, across from a gas station. The motel rooms closely resemble those of the Bates Motel, featured in the Hitchcock thriller “Psycho.” We arrived quite late, and found a note on the motel office door saying to use the intercom. “Hello?” said a quavery older woman’s voice.

I said my name.

“Did you call before?”

“Oh. How long are you staying?”

It went on like this, repeating all the details of our initial phone conversation. We were told room #7 was for us. The key was in the lock. The room was small, and smelled faintly of something; the fixtures were old and flimsy. The door did not even have a dead bolt on it.

After I stopped making comparisons to the Bates Motel, I realized the Gaslight Inn reminded me of the case Kveragas v. Scottish Inns, which we covered in Business Law. Armed intruders kicked in the flimsy hotel door of the room Mr. and Mrs. Kveragas were staying in, injured both, and made off with $3000 in cash and jewelry. If I understand the case correctly, as a guest I should be able to rely on the fact that a reasonably prudent motel operator would employ adequate protective measures for my safety. In the event that the persons responsible for the facility did not meet this standard of care, they are negligent. Of course, when the lady in the house comes and stabs us with a kitchen knife, she’ll have a key, since she’s the owner.

The day we checked out, the office was dark, and I had to ring the bell again. “Hello?” said the voice.

I said my name, adding, “We’re checking out.”

“Oh, did you tell me that before?”

“How much did I tell you the room would be?”

I had to leave a check with the housekeeper, Rosa, who had just arrived with a drink tray and coffees for her co-workers.