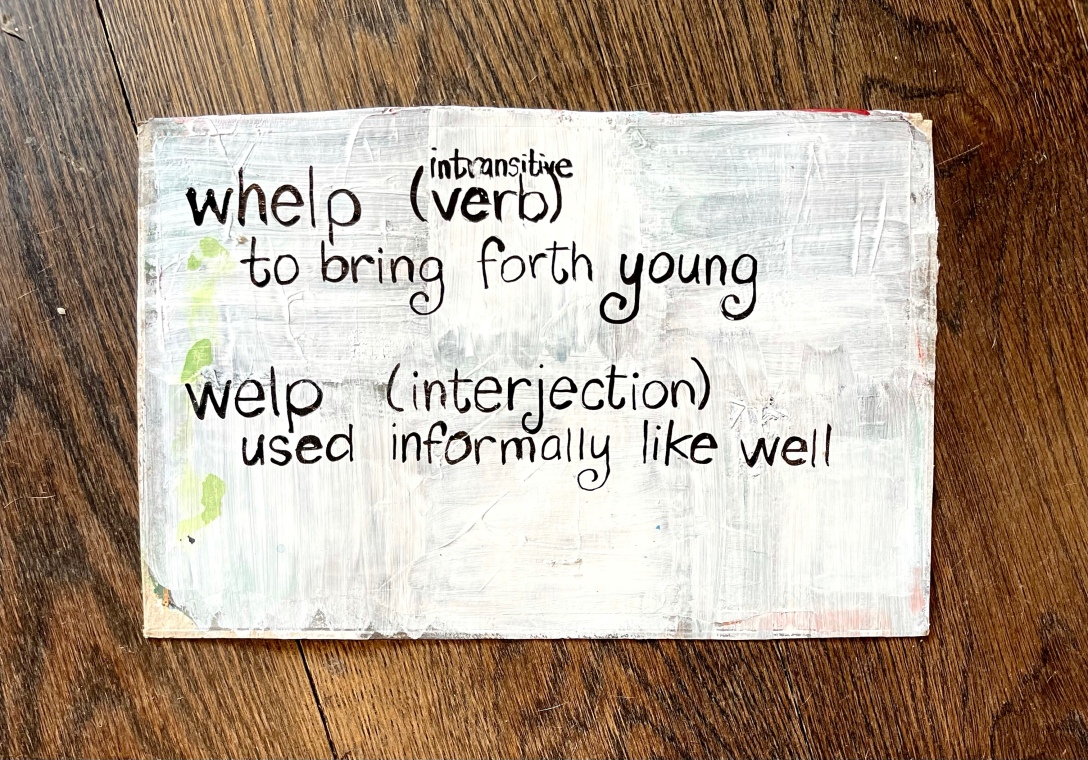 The next night, I did it again, and she was up a number of times, digging. It’s a sign that labor may be coming soon. I dutifully continued taking her temperature, and it did finally drop, and we continued the monitoring every few hours around the clock.

I was really tired from sleeping on the floor with the dog. Was it Sunday? Or Wednesday?

The puppy’s heart rate was good and strong, but once we passed the due date, it was a little on the low side, and while we could poke at it to try to wake it up, and the heart rate would rise, briefly, and fall again. We all began to be worried. If labor doesn’t progress in a dog, the placenta gets old and the puppy dies.

It’s not unusual for a singleton puppy to be born via c-section. We had been warned. It’s the puppies that signal the mother to go into labor, I guess. I thought we were ready. We kept in touch with the WhelpWise service, and our reproductive vet, and our regular vet. Everyone had input.

I made a lot of phone calls. I thought about how bitches all over the world get knocked up in the backyard by a neighborhood dog, dig a hole in the soft, dry dirt under the porch, and whelp without so much as anyone even knowing they were even preggers. I thought about the money spent, and the miles traveled, and the people hoping for an Eggi puppy. I thought about the losses of this past month, and of the past couple of years. I really needed this to come out ok.

And then I had to hand Eggi off to a vet tech in the parking lot of a strange emergency hospital in Connecticut.

And driving home, crying almost every highway mile,  and then, sitting stunned in silence in my kitchen  with my coat still on, alone in my regrets and fears.

And waiting for the call.

The call came quickly enough. Mother and baby were doing fine and would be going home just as soon as Eggi was awake enough to walk out. They didn’t want the baby in the hospital a minute longer than absolutely necessary. When we picked them up, Eggi walked out of the hospital, looking out of it and the baby, a wriggling, kicking boy was carried to the curb in a cardboard coffee bean box with an old towel in it. He was absolutely perfect.

The first night with the new puppy was extra long. Eggi seemed to be in pain from the surgery, and still quite out of it. I knew the clock was ticking for getting colostrum into the lil pupper. She was having a hard time lying down so I had to help, contriving a maneuver where I wrapped my arms around her, forced her back legs to bend and laid her side as swiftly and painlessly as I could.

All of my memories of learning to nurse came back that night. Dogs that have c-sections don’t always know what’s happened; some refuse to nurse their babies. I stayed with Eggi and held her, supervising and only half awake. I heard the puppy gulping as the milk let down. For a third night. I was sleeping a little here and there on the floor in the laundry room and nodding off in the whelping box.

As the sky lightened on the morning of the first of September, around 5:30 a.m. Eggi reached for her puppy began licking him intently, and it was like the new software had been downloaded in the night. Here was mother mode: nesting, licking, nursing.

It took a few days for the puppy to start gaining weight. But once he did, he fattened right up. Within hours Eggi could show you where he was if you asked her, “Where’s your baby?”

She had to be walked on leash for short trips only while her incision healed. I found the online support group for people with singleton puppies and made a sling so I could carry the puppy.  There isn’t much to do in the first few weeks, just laundry, and peaceful admiration for a dog who turns out to be a wonderful, attentive mother. I got caught up on some sleep.