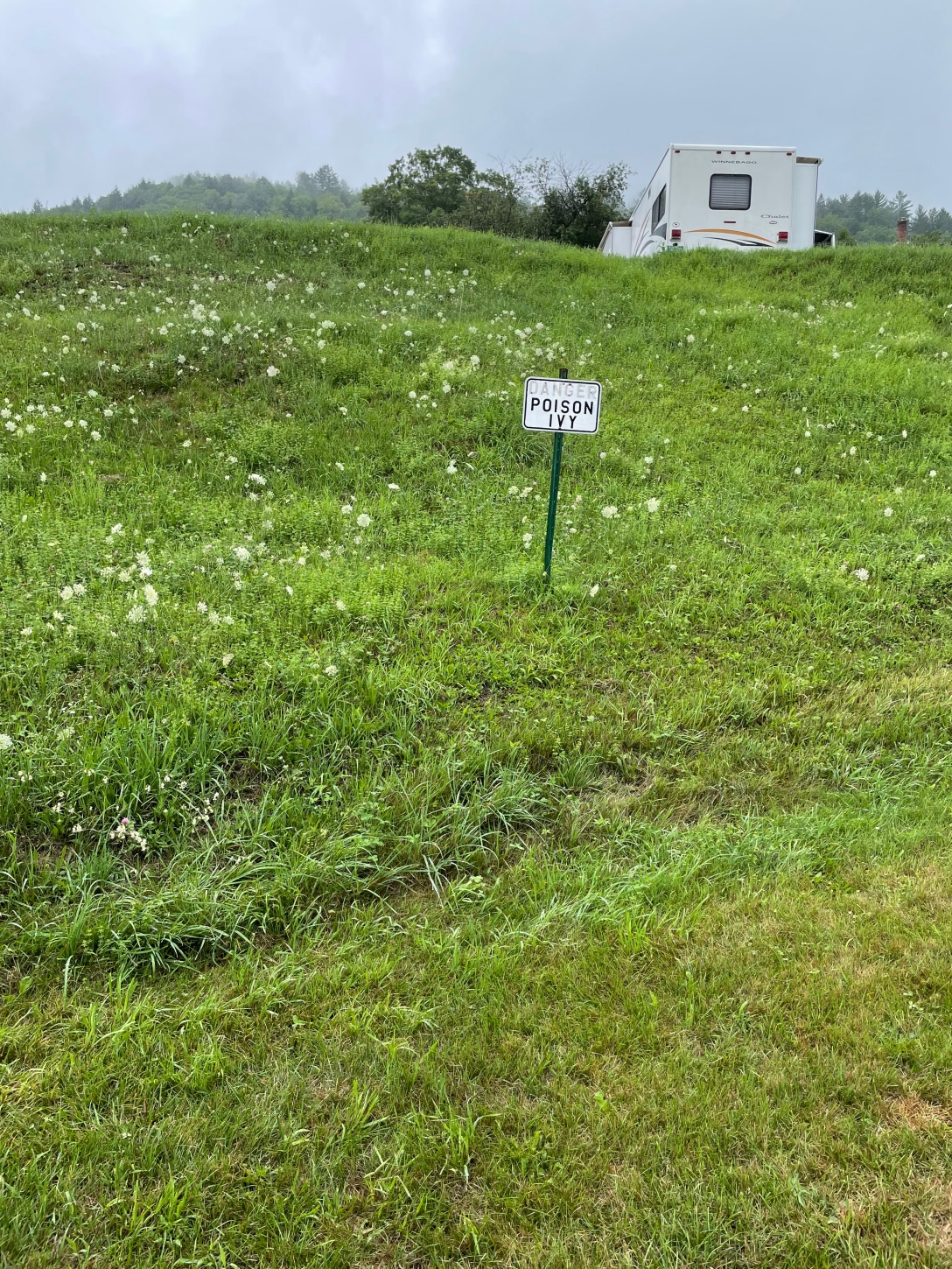 So, like, back in June when I didn’t know when Eggi was coming into season or anything, I figured that if we were waiting to see if she was pregnant in July, we might enjoy the distraction of a dog show. The thing is, I’ve been doing obedience classes with Eggi once a week since she finished puppy kindergarten, so we were as ready as we were going to ever be. When the entries opened for the Vermont Scenic Circuit, I entered her in the first level of obedience, beginner novice.

Also who can pass up an excuse to go to Vermont? Not me.

Obedience used to be a popular event to compete in, but there are a lot of different things to do with your dog now (like Rally, Agility, Nose Work, Barn Hunt,  and Dock Diving, just to name a few).

The dog shows in Tunbridge, Vermont are held in mid-July, and a popular event for the professional handlers, who all camp on the show grounds in their RVs.

There aren’t any hotels nearby, so I went with a dog-friendly Air BnB that was about 25 miles away.

The drive to Vermont was uneventful, and I would like to nominate the rest stop on I-91 just as you cross into Vermont as the Prettiest Rest Stop on the East Coast.

It was not quite dark when I arrived, and thought I’d eat at a promising restaurant recommended by the Air BnB owner, but my timing was poor and I pulled up just in time to see the last spot appropriate for a large vehicle taken by a car with a bunch of kayaks on a trailer. So I went back to the Air BnB and ate sandwiches and went to bed early.

Thursday we woke up early, ate a quick breakfast, and hit the road. I knew there was no mobile coverage between where we were staying and the dog show, so I had to pick my route and stick with it. The fairgrounds in Tunbridge don’t really seem to have an address; I used the town as my destination and was counting on the dog show judging program for more details; it said that RVs needed to follow the signs due to a low overpass. The navigon offered three routes, and I gave little thought to which I picked, other than it was supposed to be the fastest.

As soon as we turned onto Route 113, I regretted it. There was construction for the next 15 miles, with flaggers, many large construction vehicles, and long stretches of road where they are repaving and have taken the surface down to corrugated pavement or dirt.

We stopped many times.  I wasn’t in a hurry . We made it eventually.

Once at the dog show, I could see the big breed show tent and row upon row of RVs, but I had no idea where my handler was parked. There is a Parking Authority Person who decides where you park if you’re in an RV, and I guessed she’d know where my handler was, but she was nowhere to be seen. So I drove past her station hoping I’d get lucky on my own. After discovering several dead ends, I threaded my back and waited for the Parking Authority Person. She knew just where my handler was, and as it turned out there was enough room for me to park the White Whale and even stay out of everyone’s way.

Thursday was hot. Fellow’s entry got messed up and so when someone went to his ring to get his number there was no number for him. Annoying. As a result, Fellow did not show and had a very boring weekend.

Eggi and I walked to the obedience ring and watched for a while and got our number. I counted entries and tried to estimate when we would be going. We were the second to last entry in the very last class in the obedience ring, and the judge was methodical. We talked dogs with various people, hung out, walked around, and eventually had our turn. I stopped and talked to the guys setting up the beer garden. They offered me a beer; I said I would wait until after I competed. They took our picture. I promised I’d come back when we were done.

Finally, it was our turn. I was nervous, and Eggi was inquisitive and excited. Every time the judge asked if we were ready, which is the judge’s cue for letting an exhibitor know that they are now about to be judged for the next element, Eggi jumped to her feet. She was ready. Really ready.

So we did not start from sitting in heel position on the heeling pattern, but by the time we halted at the end of the pattern, she sat promptly and looked eagerly at me and I knew that she knew what we were there to do.

We muddled through, with about 15 points of deductions, but ended with a score good enough to qualify for one leg towards our beginner novice obedience title. Not too bad for our first time in the obedience ring at a show, ever.

For dinner we stayed and had hamburgers and brats with the neighbors. I left the dog show and drove back the exact way that I had come, because in the excitement of the long day I had forgotten to look for another route. In reverse, with all the contstruction paused until the next morning, it wasn’t so bad, maybe just a little rumbly for the extra length of dirt road.

Friday, I got up, made myself a sandwich for lunch, and fed the dogs in the car. I forced the navigon to take me a different way. It was easy to pick since there was obviously construction on the other two routes.

Of course, a few short miles into this route revealed construction, and once again the pavement ended and I drove a number of miles on a dirt road. But, there was a covered bridge, and several cute, tiny towns.

At the show, they had saved me a parking spot, and I parked. We had another hot, humid day, with a similar schedule and a lot of waiting to go in the ring. The judge was more efficient, and very kind. I was a bit discombobulated by being cued by someone who wasn’t my normal trainer, so I had to have a couple of do-overs, but Eggi was spot on and this time we won the class. Two legs done in two days.

Saturday, the hot, humid  weather finally broke and we had drizzle, the threat of rain, or rain all day. Bliss! As I told the guy at the smoothie truck, while he made my $6 Mocha Madness, with whipped cream, our water cycle is part of the miracle that sustains life on our planet. He wanted to know what kind of a vehicle a water cycle is. Earth science is cool, kids; you won’t catch me being unhappy about the rain.

Fellow at this point was terribly bored and neglected having spent most of the last three days sitting in his box. I took him for a walk across the fairgrounds to check the progress of my ring, and came to a blocked off road with a piece of yellow caution tape strung across it. As I stepped over I told him to jump it. Now, Fellow knows ‘jump.’ We do agility. He loves to jump. But right at this moment he was not thinking agility, and decided to go under the tape, and I had committed to stepping over, so I fell in the mud in front of a couple hundred dog show spectators. If any of them saw me, I bet they laughed.

At the start of each of the different obedience levels, the judge had a walk-through for competitors (without dogs). Most people parked their cars at that end of the fairgrounds, so they left their dog in a nearby crate and got their instructions from the judge. I handed Eggi’s leash to a different handy stranger each day, and she was relaxed and calm about it. There were many so called pandemic puppies at the show, looking overwhelmed and out of sorts about the change in routine, and all the people, all the dogs, and all the noise. Of course, the pandemic puppies will be fine, in the end, with patience and persistence, but had they the chance to see and do more as puppies, they wouldn’t need to spend so much time on it now, and could move on to more interesting challenges.

Our third time in the show ring, Eggi was flawless. She heeled consistently, sat crisply, and came when called. I made a handler error, telling her to stay one more time than necessary or allowed, and had a four point deduction. We won that class and so have a new title.

The drive home I did not even stop for gas.