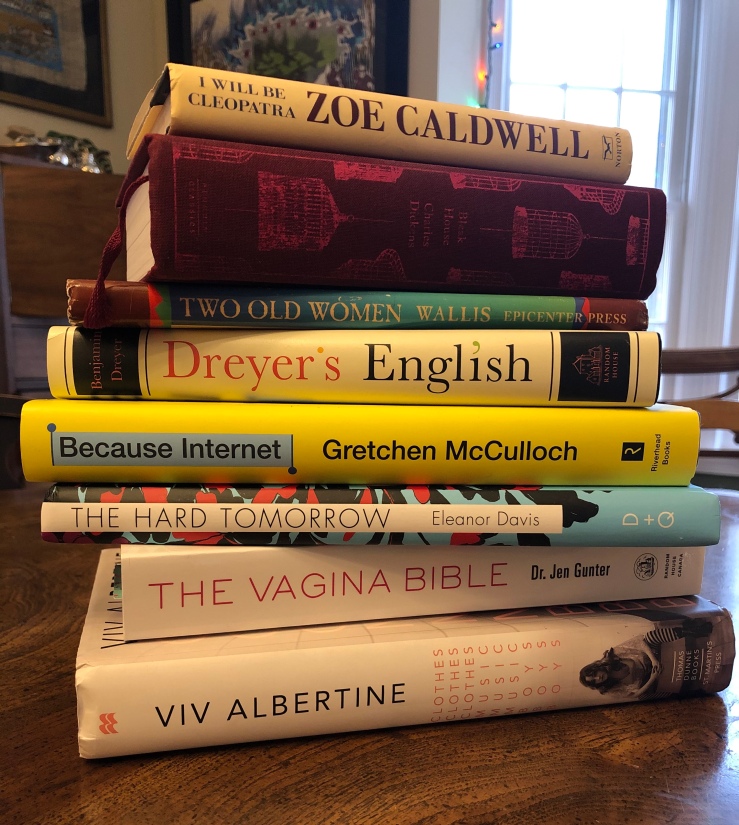 I have been keeping track of what books I finish since January 2017 (previous years here and here). My only regret is that I didn’t start doing this a long time ago. I credit my iPhone for making it easy to keep track, and Audible for making it so I can read while vacuuming, read while driving, and read while sewing.

Looking down my list, you might notice that the majority of the titles are written by women authors. This is by choice. Of course I make exceptions, like for Benjamin Dreyer (who is great to follow on Twitter), and Charles Dickens.  You also might notice that the theme of this group of books is monsters. This is a happy accident. Or a reflection of the times we live in.

May 2019
“Rogue Protocol,” second-to-last of the terrific Murderbot series, by Martha Wells
The satisfying conclusion, “Exit Strategy,” by Martha Wells (though I hear another title is coming in this series in May)
“Scratchman,” a fun Doctor Who novel, written and read by Tom Baker

June 2019
“When Breath Becomes Air” a cancer memoir by Paul Kalanithi (I sometimes read books about cancer, but this one sucked)
“Sing, Unburied, Sing,” a novel by Jesmyn Ward
“Dreyer’s English” by Benjamin Dreyer, a book I would have given my mother for her birthday

July 2019
Shirley Jackson’s “The Witchcraft of Salem Village”
Zoe Caldwell’s memoir, “I Will Be Cleopatra” (both this and the previous novel were mentioned in Dreyer’s book, as was “Bleak House”)
China Miéville’s good, weird novel, “The Last Days of New Paris”

August 2019
“Because Internet: Understanding the New Rules of Language,” by Gretchen McCulloch, which I recommend to anyone who has an opinion about the internet
“The Great Believers,” a sprawling, satisfying novel set in the age of Aids, by Rebecca Makkai
Viv Albertine’s absolutely fun memoir, “Clothes, Clothes, Clothes. Music, Music, Music. Boys, Boys, Boys”
Mary Robinette Kowal’s “The Calculating Stars,” the promising first book of the Lady Astronaut series

September 2019
“Bleak House,” by Charles Dickens
Book 2 of the Lady Astronaut series, “The Fated Sky,” by Mary Robinette Kowals, which I liked even better than the first
“The Vagina Bible,” by Jen Gunter, MD, a splendid read for anyone interested in vaginas
“The Middlesteins,” a novel by Jami Attenberg
“She said,” by Jodi Kantor and Megan Twohey, which made me shout out loud in anger

October 2019
“The Haunting of Hill House,” by Shirley Jackson
“Mostly Dead Things,” by Kristen Arnett
Laura Spinney’s “Pale Rider: The Spanish Flu of 1918 and How it Changed the World,” which I recommend highest of the books I read last year about epidemics
“Lady in the Lake, a Novel,” by Laura Lippman
Eleanor Davis’s glorious graphic novel “The Hard Tomorrow”
“My Time Among the Whites,” a nice collection of essays by Jennine Capó Crucet
Olga Tokarczuk’s “Drive Your Plow Over the Bones of the Dead”
“Two Old Women,” by Velma Wallis

November 2019
“Bleak House,” by Charles Dickens (re-read because I needed to)
“Rabid: A Cultural History of the World’s Most Diabolical Virus,” by Bill Wasik and Monica Murphy
“Asleep: The Forgotten Epidemic That Became Medicine’s Greatest Mystery,” by Molly Caldwell Crosby

December 2019
“Children of Blood and Bone,” by Tomi Adeyemi
“The Man Who Would Be King,” by Rudyard Kipling (technically, a short story, but if you listen to it twice maybe it counts as a book)
“The Butchering Art: Joseph Lister’s Quest to Transform the Grisly World of Victorian Medicine,” by Lindsey Fitzharris
Ruth Ozeki’s amazing novel, “A Tale for the Time Being”

February 2020
“The Third Rainbow Girl, The Long Life of a Double Murder in Appalachia,” by Emma Copley Eisenberg
“Fleishman Is in Trouble,” a very good novel by Taffy Brodesser-Akner
“The Devil’s Feather,” by Minette Walters
Sally Field’s surprisingly good memoir, “In Pieces”
“The Memory Police,” a novel by Yoko Ogawa (translated by Stephen Snyder)
“The Cactus League,” a baseball novel by Emily Nemens, recommended
“Where Reasons End: A Novel,” by Yiyun Li
“Poison Squad,” by Deborah Blum
“Sawkill Girls,” by Claire Legrand

March 2020
“Hello World: Being Human in the Age of Algorithms,” by Hannah Fry
“Temporary,” by Hilary Leichter