Whose idea was it to go camping?

Oh, I know. I was thinking about the fourth of July and how our goofy rich idiot neighbors sometimes shoot off some goofy big idiot explosions scaring the shit out of Captain. It was my idea to go camping.

Last July I was so tired of the fireworks we endured every weekend that I emailed the town supervisor. And I’m still peeved because I never got a reply. If you hold elected office and receive an email from a crackpot resident you have to answer it.

It’s still a democracy here. I think. Or it was supposed to be. Once.

Anyway, I still say camping is 12 parts preparation to one part insect bites, no matter what “science” says. I’m thinking that 47% of any 78 people are wrong (and maybe especially 78 people who spend too much time on twitter). But the goofy idiot neighbors made a few test shots to indicate their intention to reenact several historical bombardments, so we planned a trip to a remote cabin on a secluded lake in the High Peaks region of the Adirondacks

Then there was a threaded email exchange involving five people (one of whom repeatedly fucked things up by failing to hit reply-all) and don’t forget the “wouldn’t it be better if….”

But this was explosion-avoidance on behalf of dog, so the dates were fixed and cabins chosen. I grew up going camping in Colorado and Missouri, but the Bacon Provider did not. The Bacon Provider’s family escaped from a totalitarian regime when he was a child, so when he was growing up, camping was categorized among the Dire Fates That We Risked Our Lives Avoiding. But yet somehow being able to take all our unfrightened dogs to the wilderness and build campfires and go fishing and canoeing and hiking had now led to the joy of shopping for summer-weight sleeping bags and LED headlamps.

The way you get to the lake is you take several large highways and then the exit through a small town to a two-lane road and head for a smaller town and beyond that towards one of those towns that’s almost not a town and go left after a business that’s no longer in business and left again at a road that’s paved but unstriped and from there around a few more bends than you think it was last time to an almost-unmarked turnoff to a dirt road with a locked gate. Someone has to get out to unlock and then hold open the gate, and then close it again after the car goes through. Then there is a second, similar gate a ways after that, and it’s at this point that the road really narrows and the trees close in and you realize you have to go all the way to the end to turn around, but it’s at the end where you will park.

While other people unpacked I took the dogs around so they could see where they were. Captain was very excited to see the lake again and expressed his enthusiasm by jumping off the dock.

Fellow has never seen a lake before and because everything he encounters is For Him, he ran at it, full-speed, hitting the water at an open gallop, which translated nicely into swimming, which is what he had to do next, directly, immediately and in order not to drown forthwith.

Eggi fell in sometime after this what with the excitement of the other dogs bumping and jostling on the dock and she was having none of it: cold water, phooey!

She fell in once again over the next few days and sank and panicked so I will have to commit to getting in the water with her next time. If there is anyone in this world who understands the struggle of learning to swim it is me.

The Bacon Provider took meal preparation very seriously and made bacon and eggs and grilled toast over a campfire. He also caught a fish, a nice-sized bass, and it was delicious but I didn’t get a picture before we cut its head off.

The rest of the trip included two hikes, some rain, fishing, campfires, sailing, canoeing at all hours, more rain, and bug bites.

The four primary biting insects of the Adirondacks are mosquitoes, black flies, midges, and deer flies. I was bitten by all of them. And also two different kinds of lil’smol green monster flies, one that was cronchy when you crushed it and the other that was squishy. The deer fly bite swelled up and looked very dramatic but lack the itchiness of any of the others.

The dogs had a super time. 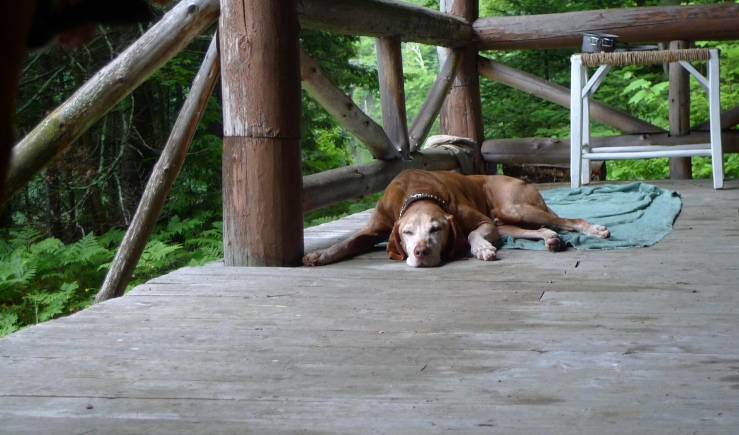