On the second day of the show cluster, I loaded the dog, got in the car, punched up the directions on my phone, resumed the audiobook about cancer I was listening to, and hit the road. Then I turned off the directions because I knew the way out of my own neighborhood. And then I turned off the book because it was depressing. In the minutes of silence, I decided Eggi wasn’t going win anything this day. It was hotter. Sunnier. More humid. Also, it was Saturday, so there would be more competition. I was prepared to go home early.

I turned the book back on.

S says that when you win, the other owners will put a target on your back, try to beat you. I am still in the bubble of naïveté, where everyone at the dog show seems a little strange but also nice enough.  I know my attention span, which is short, so I go to dog shows only once a month. So I feel there I’m still somebody almost nobody knows.

I didn’t find a shady parking spot, so I moved Eggi from my car to a kennel in my handler’s van. Then I wandered around the show grounds. I unexpectedly encountered our chairs, still set up next to the ring where Eggi showed in the group the day before. I hadn’t even missed them yet.

In the chaos of people going in and out of the ring someone handed me the leash of a dog to hold. I don’t know what dog it was. Then they was traded me for another dog. Then it was time to sit down and watch Eggi compete for best of breed. 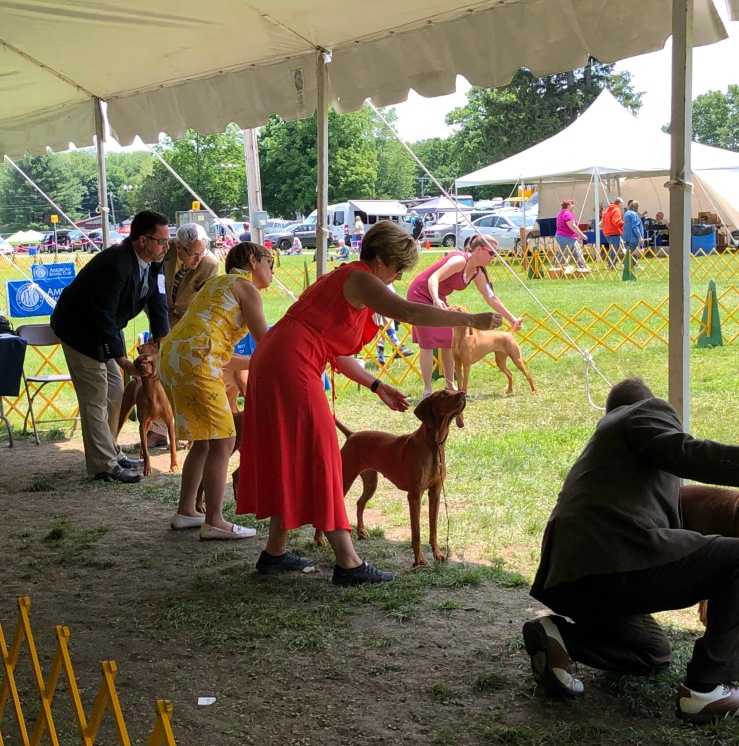 At a dog show, amid the quiet cacophony people talking and laughing mixed with dogs whining and barking, you don’t normally hear the judges in the ring. Judges you have to watch. They don’t say much beyond, “Down and back,” or “Take them around.” Some judges give you a glimpse of their thinking by looking pleased when they see certain dogs. Others give nothing away. I still have to remind myself to watch the judge and not my dog.

Judges indicate their choices by pointing, either with a flat hand or an extended index finger. This judge pointed at four vizslas. Most of the time, judges pick the best of breed first, best of opposite (sex) second, and then maybe a select dog and select bitch. The judge pointed at the bitch behind Eggi, a dog ahead of her, another dog, and then Eggi. So, I thought, she went select. That’s good. Not a win like yesterday, but points are points. I had started the day prepared to lose.

Then the judge looked at the four he’d pulled out of the line, pointed at Eggi with one hand and the bitch he’d pointed to first with the other, and with emphasis (and maybe a little vexation) he crossed his straight arms, indicating that the two bitches needed to change places. The chatter of the people gathered under the tent to watch the vizslas paused.  It was quiet long enough for me to hear when he pointed to Eggi and said, “Best of Breed.” 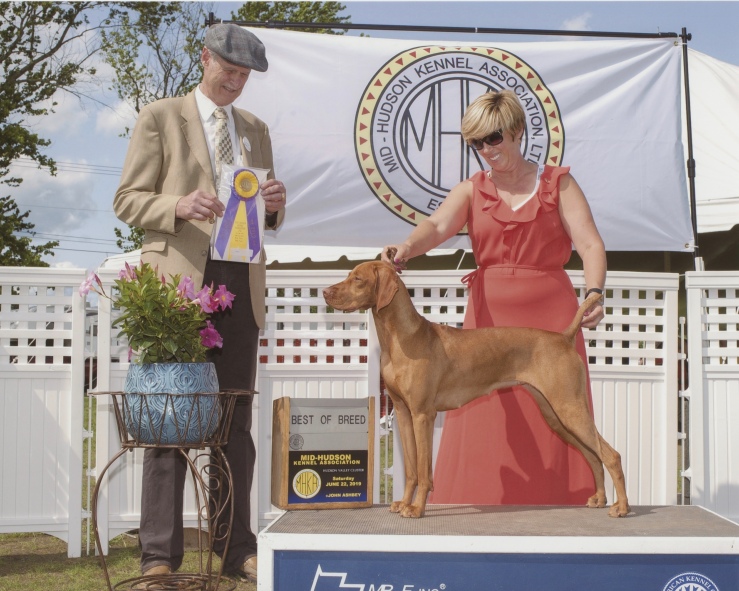 Now I felt like the day before hadn’t been a fluke. What fun! And, once again, we spent the warm afternoon waiting for the sporting group.

I bought empanadas from a food truck and they were so good I ate them without waiting to sit down. I held the leashes of a couple more dogs. Then I spent some time talking to some other vizsla owners and as of this writing I can say that I do remember one of their names.

My handler was stuck in another show ring with a boxer or maybe German shorthaired pointer when it was time for Eggi to go in for the group, so the handler’s husband took Eggi in. 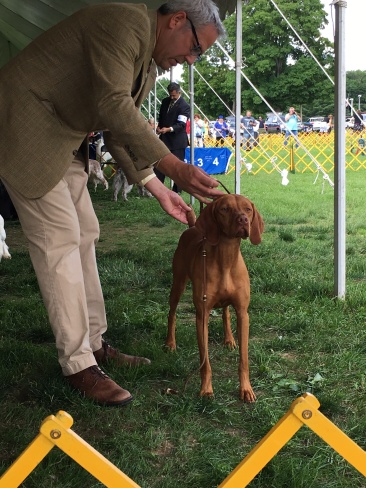 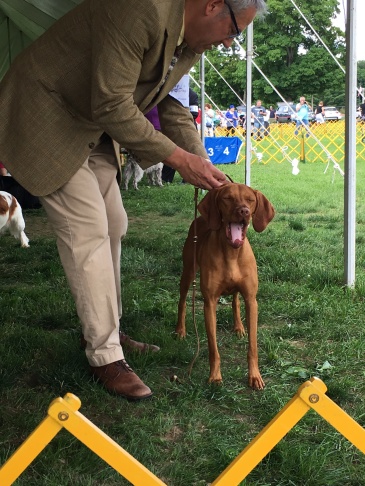 He did a great job, but she seemed a little bit beat. No more ribbons in the group.

We were home in time to play in the yard. I guess she got a second wind. 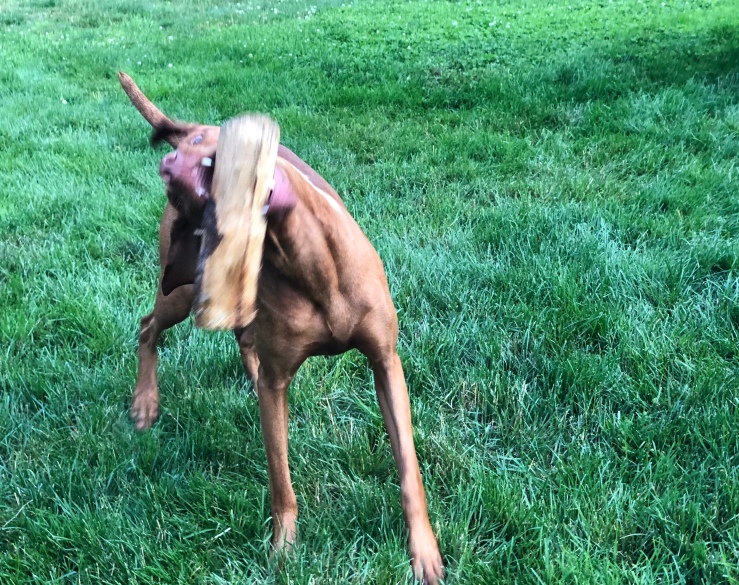 The third day of the show cluster I woke up with a migraine, and cancelled. Eggi has 16 grand champion points as of this writing, so she needs 9 more points, including one major win. To become a grand champion, she will have to do a several more shows, even if her winning streak continues.

1 thought on “Case in Point”