What I wore: four weeks after the foot surgery, I finally got an air-cast. It is a two piece plastic walking-boot/contraption that you wear over a giant white tube sock and secure in place with three enormous velcro straps. The nurse fitted it to me and said “This will be a transition week. You’ll still need your scooter for distances. But do what you can. Your body will let you know what is too much.”

How I got red eyes and a blotchy nose: I couldn’t actually stand in the air-cast at first, and used my knee-scooter to get to the car.

I went to my room and got into bed, bitching to no one in particular about not being able to walk in the walking cast. I took it off and had a long, self-pitying cry.

Who went with me: a couple of hours later FedEx wanted a signature so I strapped the medical-device-gray ski boot back on.  To my surprise I found that I actually could take some steps unassisted. Yes, I was wobbly. Yes, it was stompy. But I got up the killer three stairs and to the front door and realized I was walking. 20 and I went for a short dog walk with the knee scooter just in case. 20 took Captain and I took our 15 year old dog Cherry.

It was not too bright, not too cold, and there weren’t any cars on our road. The feeling of liberation was real.

What I did beforehand: as Cherry has been disintegrating in her advancing age, I have been throwing remedies at her which seemed necessary and reasonable. It started with joint supplements. Next I got her dog hoodies and a pressure-sensitive electrically-heated dog bed.  After that it was laser treatments for her ear infections and acupuncture for her weak hind-end.  I got her some toenail covers to help with traction, and some Doggles (dog goggles) for when the sun was too bright. And when she started being picky about her food, I started cooking for her. Over the course of two years she went from an old dog to a reason we couldn’t travel.

Where I sat: the next morning I went to the barn and went for a walk on horseback. Staff were divided between the folks who thought it was awesome that I would get on a horse in a plastic walking cast and the folks who thought I was completely, certifiably, nuts. One person actually told me he thought I was crazy to get on a horse with a cast on my foot. The rest of them just looked at me with what appeared to be bemused alarm. The ones who thought it was awesome said so. I was so happy to be there and not just standing around answering questions about my progress that I didn’t care. I rode about 20 minutes and got off. 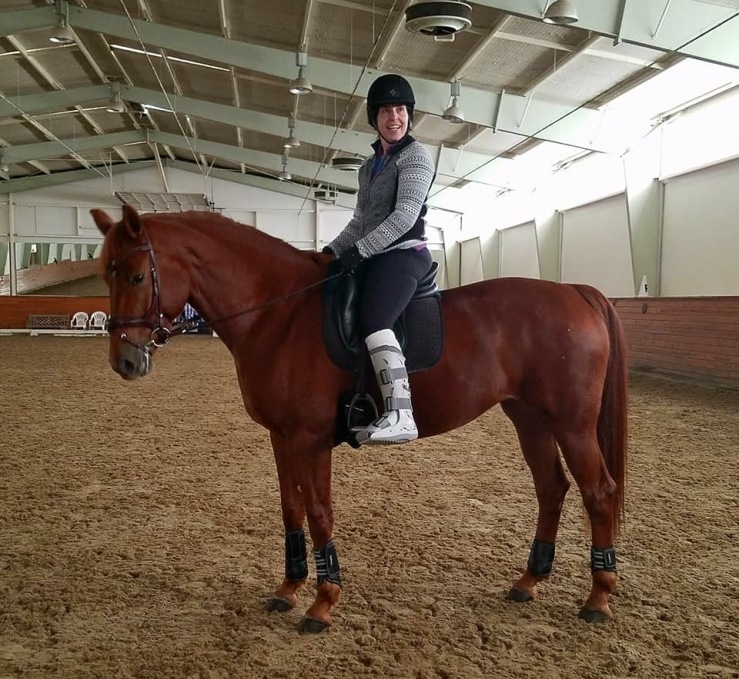 Why I saw this show: I wanted a dog almost as much as I wanted a pony as a kid, and I have loved having them in my life, even when they do embarrassing things, or annoy the neighbors, or have violent diarrhea.

Why my sun-room is now a questionable shade of yellow: the next day was Saturday and the Bacon Provider left for a week-long business trip.  I have been very sad about the pace of travel in his job this fall,  and never more so than on this weekend. Also, the painters showed up and took over several rooms. I made some impulsive choices about paint colors.

How I got wet: the following day it was warm enough to give the dogs a bath. Cherry loved a bath even though she needs help getting in and out, but afterward she wouldn’t settle down on the pile of towels I spread on the bathroom floor and ended up wandering around the bathroom and got stuck in the shower.

Things that were not funny: the day after that Cherry went outside to go potty and never came back in. I found her collapsed in the grass. I stood her up and got her to follow me in. She was not alarmed. I was.

Things that were sad: two days later she could not stand, even with help. She was covered in pee and didn’t want to be wiped off, so after cleaning her, I pulled out an old bottle of dog massage oil and after a few minutes of my attention, I settled her back down. I used up the oil and went online and ordered several essential oils.

Then: I called the vet and explained that I needed to bring my dog in but that I was in a walking cast and would need help getting her out of the car. The receptionist gave me the names of three vets who do house calls in my area. I called the first name on the list and left a message. I think he was a vet I had seen in the past. After about an hour I got anxious from not hearing from him and I looked up the other two vets online. The last one seemed to specialize in end-of-life veterinary care, including hospice and euthanasia. She also had online booking. I was able to make an appointment for the next morning without having to burst into tears again on the phone.

Cherry started screaming again and I changed the house-training pads under her.  The supply of pads was down to a half dozen and I had to go to Petco for more. I found that when I lived in North Dreadful visits to Petco could be very sad and lonely for no reason I can easily explain, and this quick trip felt especially echo-y and poorly lit.  I bought pee pads and a pink stuffed pig toy with a good squeaker in it for Captain.

Who should see it: the next day the painters arrived early. From her heated bed, Cherry drank a mouthful of water and a bite of food but no more. The vet came in one of those Mini Coopers that looks like a mini hearse. She wore scrubs and brought in a big old-fashioned black leather doctor’s case and sat down on the floor with me and Cherry. She asked a lot of questions. Captain brought her his Kong toy and made a nuisance of himself. Her opinion was that the dog was pretty far gone already. I got 20 to come down and hear the vet say that again. “If she isn’t drinking,” she said, “She won’t last more than three more days.”

I think I’ve been getting ready for her to be put down for a few months. I don’t remember when she last wagged her tail. 20 had to get ready over the course of a few days.

Anyway somehow in the middle of this difficult conversation the electrician showed up and I had to get up from the kitchen floor and stomp with my plastic cast up the stairs and show him which fixtures we didn’t have yet and which we did and where they went.

Then I stomped back to the kitchen and sat down on the floor and tried to convey to the vet that despite the flood of tears that had suddenly burst out of my face I was in fact ready to do this very hard thing. I announced to the room that there was no treatment at this point that was going to make her strong or well enough to stand and walk again, like it needed to be said. It didn’t.

What else I saw: Captain sat on his big new monogrammed Orvis ™ bed and saw the whole thing. He stood and came over an checked her out before she was wheeled away.

And: The vet made a print of Cherry’s paw in clay, and left it on the kitchen counter. I said goodbye to the vet on the driveway, thanking her for doing a hard and important job. She gave me one of the nicest hugs I’ve had in a while. Certainly the best hug Ive ever had from someone I’d just met.

I went in and put Cherry’s bedding the wash, unplugged her heating pad and folded it up, wiped the floor, and moved Captain’s bed to conceal the hole left by Cherry’s departure. I texted the Bacon Provider with the news and a picture or two. I did not know he was sitting at his boss’s keynote speech, between two board members.

The very next thing that happened was someone came from the kitchen cabinet shop to measure.

And: a fancy box containing Cherry’s remains were returned to us by the vet a few days later. And a few days after that a bunch of essential oils arrived which I had little memory of ordering. I mixed up a small bottle of oil with lavender and bergamot and gave Captain a little massage. He loved every bit of it, but he loves everything.

What I saw at home: I am looking at some of the new paint colors with suspicion, but I’m avoiding it by getting back in bed. My body has let me know that it is too much.

6 thoughts on “Too Much”