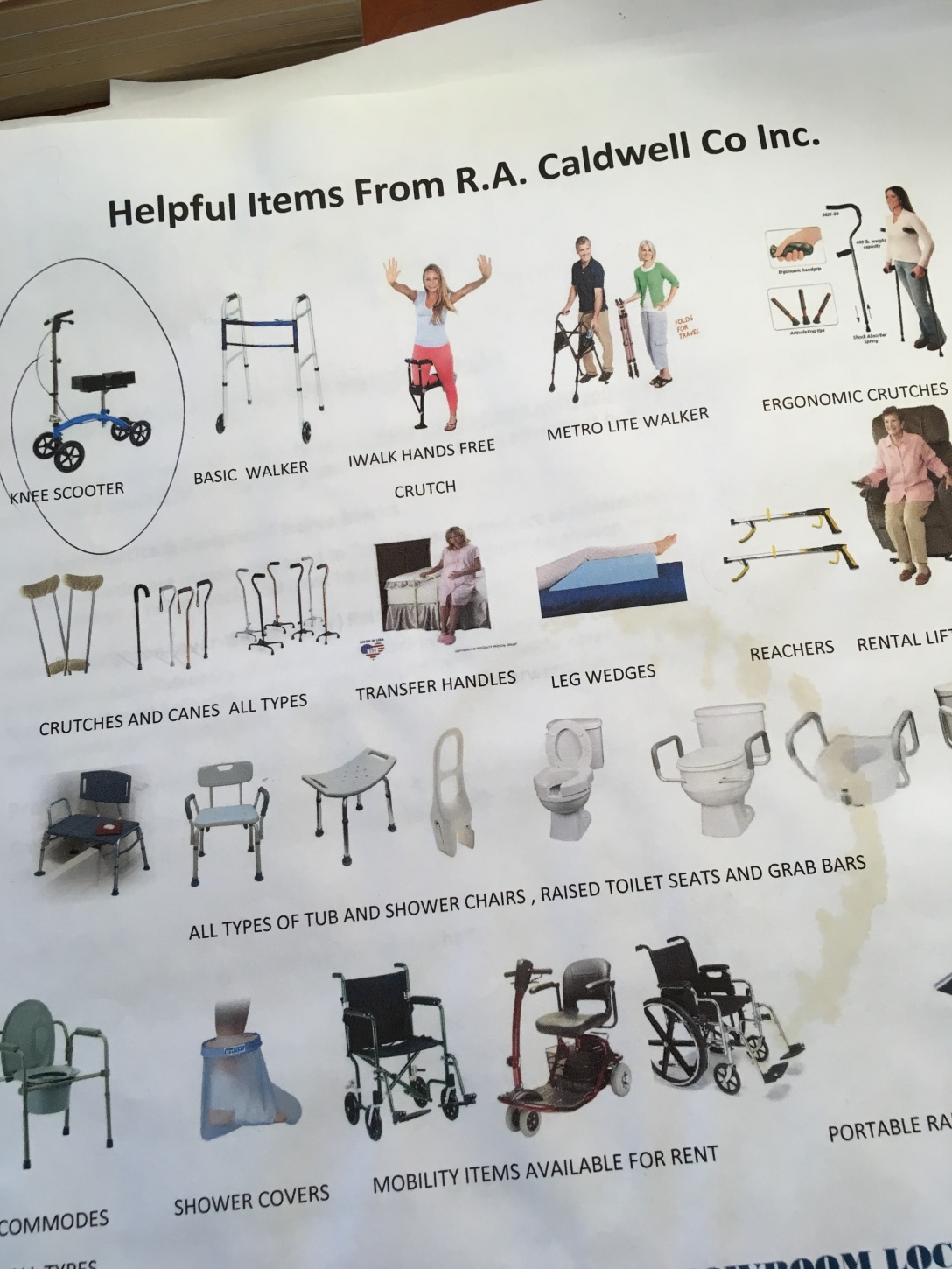 What I saw: the physician’s assistant handed me a stack of pages of pre-operative instructions, including a page of “Helpful Items,” with pictures of crutches and canes and walkers and wheelchairs (things that no one ever thinks they’re going to need) and said, “You will want a knee-scooter.” It had been hurriedly circled in ball-point pen. I did not want it. She went on, “You can rent them, but…,” she said, glancing at my feet, “If you’re going to have to get both feet done, you’re probably better off just buying one.” 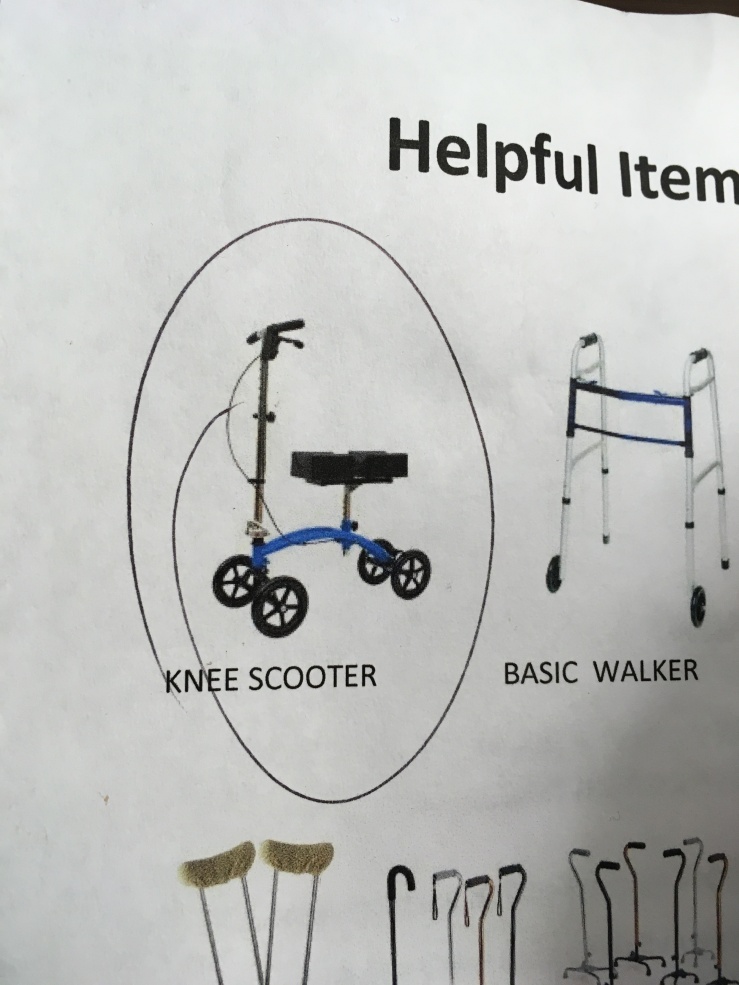 What I did beforehand: I avoid shopping with the Massive Online Retail Monopoly, but they have all the things and also all the reviews. You simply must read the reviews of these knee scooters or you might end up with the wrong one.  As for me, I had to read the reviews of the wrong scooter after I had found the right one to figure out that I was actually wrong. I had to get the child-sized scooter, because the manufacturer makes a “regular” sized scooter for people who are larger than the average size woman.

I got the one with the three wheels (instead of four) in the hopes of not hitting myself constantly in the ankle of my “good” foot. And I got the one with the bigger, 9” tires in the hopes of not wiping out thanks to a pea-sized bit of gravel on my driveway, or succumbing to the enormous thresholds of the doorways in Mrs. Gardenwinkle’s 80s museum. It came in a big box that arrived via drone only three minutes after I ordered it, and I had to put it together with the shiny, enclosed tools. It came with lots of written instructions, stern warnings about not backing up, and even has a training wheel, to put on the side opposite your good foot, for people with stability issues. I had the Bacon Provider adjust the brakes and finish the tire inflation. We took turns riding on it before my foot surgery, to see how it cornered (not especially well), to see how fast it could go (not especially fast), and to see how it stopped (well enough). It sat in the corner of the dining room like a vague threat until the surgery.

What I wore: the wrong pajamas.

Who went with me: I have to back up a little and say that Cherry turned 15 this summer and is now completely deaf. When she was a younger dog, she knew a good number of useful commands like sit, come, stay, down, don’t touch, and take it. I even taught her hand signals for sit, stay and down because I always thought that’s what good dog owners did to prepare for the day when their dog could no longer hear. Cherry’s hearing seemed to vanish suddenly and completely about two years ago, but in retrospect it was probably failing for a while and she masked the loss by continuing to seem obedient by making educated guesses about what she was supposed to do. Those educated guesses were her forte from a young age, and it was why I was able to get her to climb on top of things like big rocks or tree stumps for pictures. We are unprepared for her diminished vision, though. You cannot call a deaf dog. And you can wave all you want to a dog who can’t see, but she’s not coming to you except by luck. 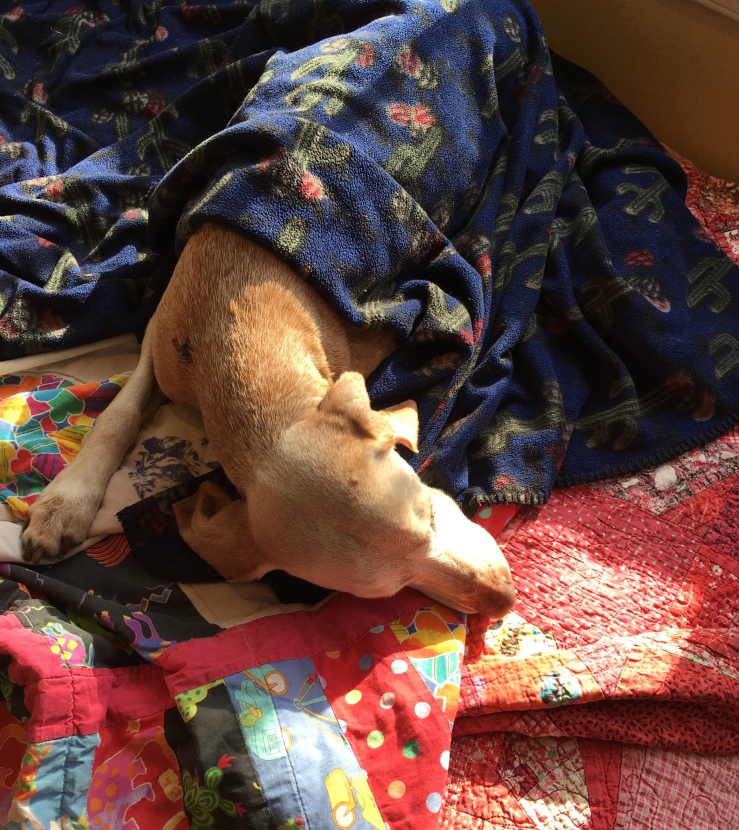 How I got tickets to the shit-show: Cherry seems to be able sometimes to see a waving hand about 6 feet away. She gets up and down the stairs from the kitchen to the yard with a great, clumsy leap. Sometimes Cherry wanders around the kitchen looking for people to stand next to, which is sweet but kind of annoying when you’re cooking. When she rises from her dog bed and starts wandering around the kitchen, then we wave our hands to try to shoo her out the door. She makes her leap off the stairs having no better plan. Some mornings we get up and she’s had more than one accident in the kitchen. The sting of frustration about this is dwindling as she becomes more and more frail.

Why I saw this show: so, the Bacon Provider had to do a webinar one morning, just a couple of days after my foot surgery. I was still unable to put any weight on the bad foot, spending most of my days with it elevated in bed, and taking pain meds.  I said derisive, colorful things about the word “webinar,” and some insightful things about capitalism. Only the cat heard me. He agreed, I think.

Things that were not funny: before you need your knee scooter you can tool around your dining room, but it will never prepare you for the horror of a bathmat, a narrow bathroom, a pile of laundry, or a pair of shoes in your way. You can’t pick them up. You can’t go over them. You can’t go around them. The turning-radius a knee scooter is one half to two feet to large for most of this 80s museum. Also, you will come close to falling for surprising reasons, like missing the pad where you’re supposed to kneel, or smashing yourself in the good ankle, or the unexpected shoe (and it’s never your shoe, because all you need now is one sad shoe for your right foot, a sacrificial shoe, chosen to get extra, uneven wear and be forever associated with the dark days of recovery from surgery).

What it is: somehow, thanks to the webinar, I got stuck with feeding the dogs breakfast.

Things that were sad: there were dog blankets all over the kitchen floor. People in my family cover the dogs with blankets when they sleep. Yes, this is ridiculous, but Cherry gets cold. But also, she is a dog, and being a dog, she wakes up and gets a drink and the blankets come sliding off and get dragged across the floor and left there when she goes back to her bed.

Who should watch their step: of course, Cherry is no longer really very housebroken so sometimes she gets up to go on the floor and other times she just poops in her sleep.

Things that were funny: so when I scootered across the kitchen to get a can of dog food and there was a dog blanket on the floor and I tried to back up, bend over, and pick it up, I was showered with dog-poo nuggets. And I don’t know if I was like, trying to nugget-dodge or maybe bounce them away from me like they were dog-poo-hacky-sacks, but I wobbled. Cherry, who was hungry, which was the whole reason I was trying to do things in the kitchen at all, was right up against me, keeping track of me the only way she can anymore.

Where I sat: so when I started to fall, I also hit the old dog, who also fell. No one was hurt, though the scooter and I were kind of tangled up and the poo nuggets were involved. Cherry wasn’t so much hurt as she was startled, and so she kind of had the shit scared out of her. The exertion of trying to get back up made her poop some more, and because she and I fell together, now she was pretty much just pooping on me. I’ve had dogs for about 25 years, but I think that was the first time I was pooped on directly by one.

When that was over, I righted the scooter and tried to stand. My pajama pants (these being the sub-optimal pajamas and not one of the two pairs of optimal, post-operative lounge-wear) got caught on one of the bigger, 9” tires of my five-star-reviewed knee scooter as I was trying to stand up so I fell again.

Where I sat on the way home: so I had to crawl around picking up the poo-nuggets, take off my clothes, wash my good foot, and still feed the dogs, and when I was done I had so much leftover angry energy I hauled the vacuum cleaner out, and took out the trash. I can’t say why exactly I sat down on the floor of the garage while I was taking out the trash, but I did. It was cold, and quite gritty, but not nearly as bad as falling in dog shit.