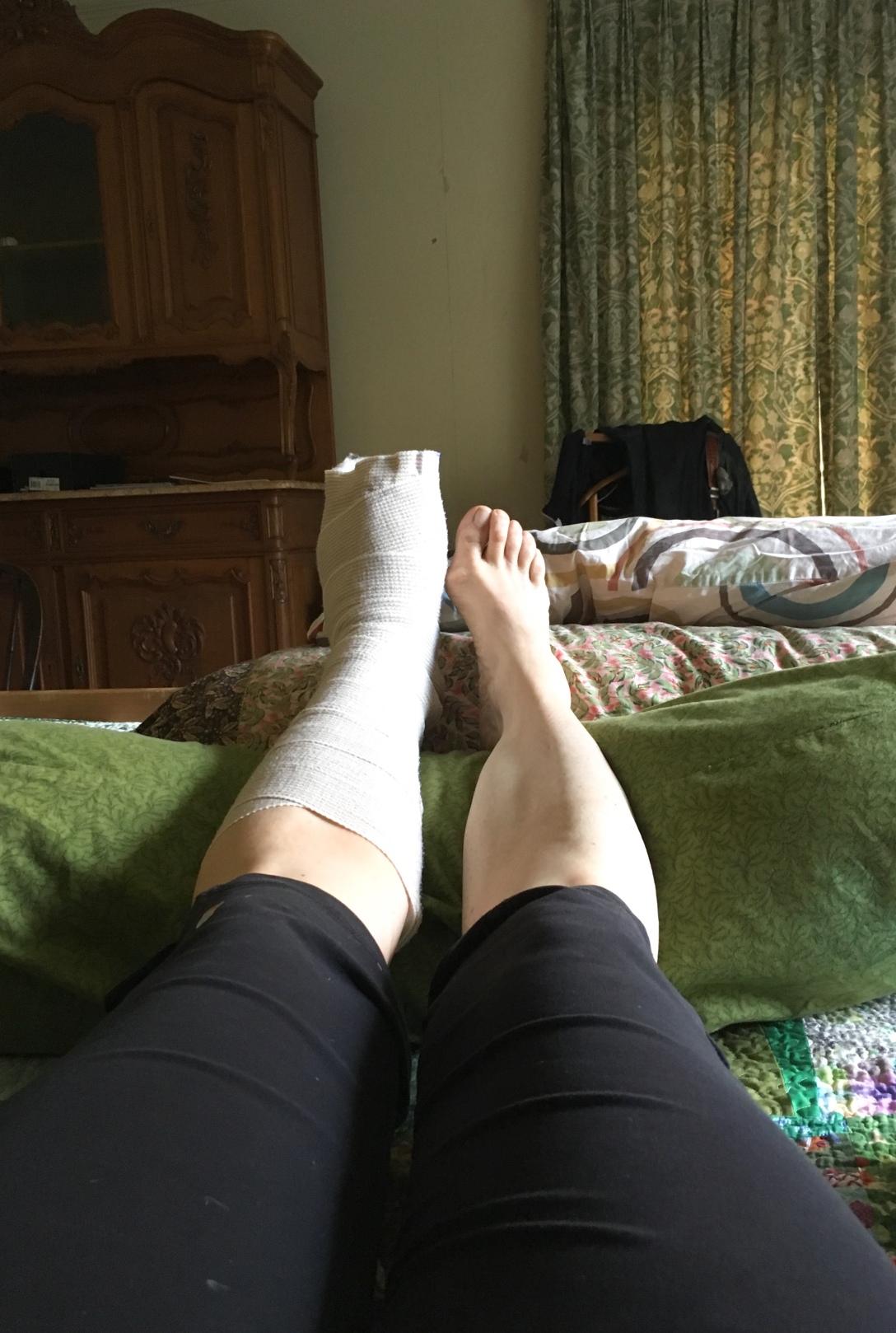 What I saw: maybe in 2000 I had my first inkling that everyday foot pain wasn’t normal/good and I went to see My First Foot Doctor who told me about his passion for tap dancing and about all the different bunion-prone races of people in the world. In addition to (incorrectly) guessing my ethnicity, and sharing his theories on race that he should have kept to himself, My First Foot Doctor described (too much like Dr. Frankenstein leaping around the lab shouting, “It’s alive!”) an unnamed surgery where he would cut my feet open, break certain bones and screw them back together. When he saw my enthusiasm wasn’t up to the same level as his, he sent me to get some custom orthotics, and told me, with authority, “Your feet have no integrity.  Never run.” 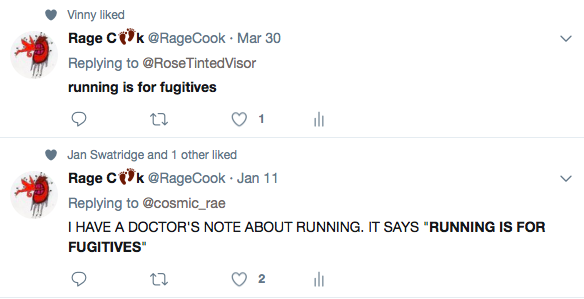 No problem there. Running is for fugitives.

What it is: I wore the orthotics, got rid of both pairs of my beloved, ankle-spraining Dasko clogs, started wearing more boots and fewer heels. Ten years later I tried again, with a different doctor. This one was a little less creepy but so completely impressed with himself, in a way that only a credentialed white-coat-wearing tall white man who wants to cut your feet open, saw your bones into pieces, and screw them back together can be. He was disappointed not to be The First Man Ever to tell me to get orthotics and throw away all my high heels.

Things that were not funny: I had yet to have a doctor use the word “bunionectomy” with me, and I had yet to hear what the surgeries they were so eager to perform would do to correct the underlying cause. While addressing the problems, their bone-breaking-and-screwing-back-together had nothing to offer to prevent the recurrence. Also, the bone breaking and screws sounded pretty terrible. I could also say something here about the really terrific health insurance Microsoft used to offer back then, but I make it a policy not to say nice things about them.

Why I saw this show: New York is brutal on feet. Even if you mostly stay out of the city it will give you blisters when you don’t. My feet hurt and I’m getting too old for this shit. I tried a nearby podiatrist in Bedhead Hills. I could have guessed from the incomprehensibly ugly angular building, clad in pale green roofing shingles that it would be a no-go. The stained waiting room carpet was warped and curling in the corners. The receptionist did not greet me because she was on the phone talking about shit she shouldn’t have been talking about at work. There was original Weldwood paneling. The only other patient looked like she was going to die of ennui. The Bedhead Hills podiatrist held my foot in his hand and didn’t let go. He told me my good foot was actually worse than my bad foot. And he dropped the b word on me.

How I found a doctor that didn’t give me the willies: I go to Pilates a couple of times a week, not because I’m trying to be a cliche or anything but because I like it. Some of the people at Pilates talk too much. I try not to be that person, the one who complains about her anxious kids, or her friends and their poor choice of partners, or her husband’s career, or her feet. I don’t want to blurt things out about my children and their anxiety, or my friends’ relationships, or my husband or my feet, so I let my Pilates teacher do the talking. She counts and tells me things.  The subject got around to foot doctors and she claimed to know The Guy.

“He did my sister’s feet. He’s done several of my clients’ feet. He’s The Guy.”

I kept the piece of paper she gave me with The Guy’s name on it for a few months, pretending that I couldn’t read it or that I thought his name was a misspelling. I didn’t want to see a doctor in Connecticut because I have a known allergy to Connecticut, but as if to prove to myself that this guy would be just as creepy as the rest, I made an appointment. The office was clean and professional, and I was seen on time. I met his nurse and liked her. And The Guy himself was clear, upbeat, and unafraid to use the real names for things.  He told me that if I’d had surgery 10 years ago it would have failed by now.

He  described a procedure that would leave me with some airplane parts in my foot. Those parts would be the actual solution to the cause of the problem.

What I did beforehand: I remember being a kid and writing “1976” in my diary and thinking about how weird it would be that someday I would write “1980” or “1990.” I counted how old I would be in “2000.” I spent this summer thinking about the perfect date to do a surgery–a surgery more unimaginable than being 37 is to a 13 year old. Who plans to give up walking for a while? How do you put something off for almost 20 years, and then wake up one Thursday and look for a spot in your calendar for it?

And then there was the Bacon Provider’s work schedule to consider.  I imagined I was going to need him at home for about two weeks, and it would be fine to do calls after the first couple of days. Then I thought my normal self-sufficiency would return.

What I wore: I really only have two pairs of pants that work with the dressing on my foot post-surgery. This would be enough if I were currently the person in charge of the laundry.  So I am wearing pajamas all day which is fine anyway because mostly I’m in bed.

Who went with me: the Bacon Provider drove me to the ambulatory surgical center.  When I checked in, I had to prove my identity with a photo ID and my health insurance card.  The Guy greeted us and wrote on my foot so they did the right one.  A nurse gave me something to make me sleepy and someone else did a nerve block behind my knee and I don’t remember anything after that.

Things that were funny: when I woke up, they let me have a delicious cup of ice chips. I smiled at everyone like I’d done a fine job. The surgeon came and showed the Bacon Provider before and after x-rays of my foot, adding, “This is as bad as they get.”

“How do you even walk on a foot like that?” asked my husband.

Something I ate: the next day, my friend S. sent us turkey and pastrami sandwiches and matzo ball soup and it was one of the most delicious things I’ve ever had.

Things that were sad: I came out of surgery with pins sticking out of my toes and couldn’t get my foot wet for a couple of weeks. The nerve block was supposed to last about 20 hours, but lasted longer, with a prolonged couple of days of bad foot feelings as the block wore off. I took the pain meds ’round the clock until I didn’t have to (and mostly it seemed like they don’t do anything about the pain they make it so you just don’t care). After two weeks I got my stitches out, and The Guy pulled the pins out of my toes (which felt a way I would forget if I could). Then I was cleared to take a shower, but showers are scary when you have to stand on one leg.

How I get around: I have a knee-scooter until the day when I get a walking cast, which is an exciting prospect about a week away.

Who should do it: lots of people get foot surgery, and even more need it and put it off for years because they hear/fear it will hurt and it will be inconvenient. My experience has been that it hurts, and is inconvenient. My estimates of how much help I’d need, and for how long, were completely unrealistic. 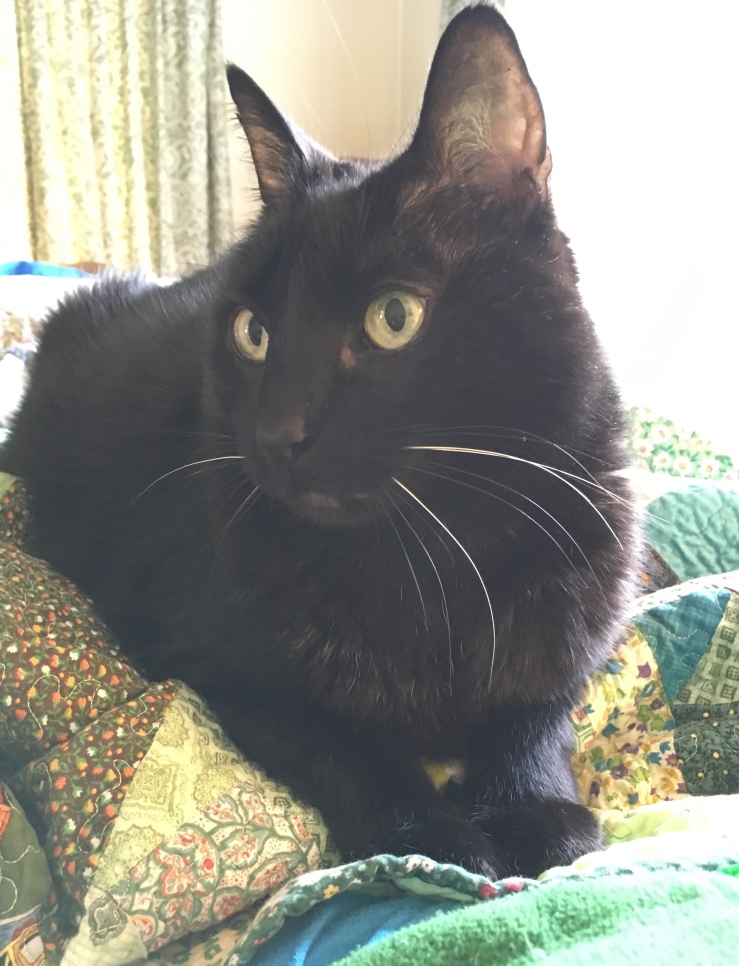 What I saw at home: the cat has been disappointingly aloof, napping near me but not with me, trying to bite me if I try to pet him, and hiding from the knee-scooter like it offends him.

One more thing: I have to do the other foot someday.

2 thoughts on “I had waited long enough”