What I saw: “The Light Years,” a play by The Debate Society, at Playwright’s Horizons, 416 West 42nd Street, in Manhattan, on the south side of the street after the scaffolding ends but before the Hudson River, on that weird off-Broadway strip of theaters I can’t keep from confusing with each other.
What I did beforehand: the first year we lived in New York, I thought that coming into the city on a MetroNorth train was like riding an futuristic satellite elevator from an orbiting space station to the surface of the planet. The atmosphere was different. And the gravity. The conductors needed shiny silver suits, of course, but I used my imagination  Five years later, I don’t feel like a prisoner here as much as I did then. Still, the way the train dives under the streets just south of Harlem means the commuters have to emerge from under the city’s skin, like parasites hatching. I brought homemade beer, anyway.

What I wore: Chinese-made Australian boots, new James skinny jeans, black Brooks Brothers fitted cotton blouse, too long Eileen Fisher cardigan, hoop earrings, gold bead necklace, black parka, favorite rag & bone scarf.
Who went with me: The Graduate and his gf S; she liked my jewelry.
How I got tickets: about a week ago, online. They were the last three seat available.
Why I saw this show: it was billed as a “spectacular tribute to man’s indomitable spirit of invention.”
Where I sat: Row B, Seat 5, next to two unoccupied seats on one side and a woman who laughed too much on the other side. I, also, laughed too much. 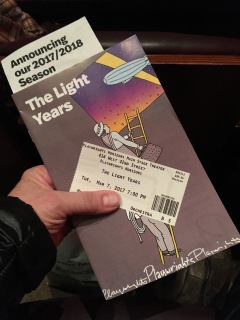 Things that were sad: [spoilers]
Things that were funny: lightbulbs, songs, monologues, promises, and a bucket.
Things that were not funny: this one time I was brushing my teeth and I went to put the toothpaste back in the medicine cabinet and got shocked by it. This is the primary memory I have of the place we lived in Salt Lake City in the mid-80s.
Something I ate: a bag of peanuts in the lobby
What it is: an unusual play about the creators of the 12,000-seat theater called The Spectatorium for the Chicago World’s Fair of 1893.
Who should see it: electricians, Chicago aficionados, history buffs, aluminum evangelists, love story bugs, theater nerds, devotees of the Depression, bicycle enthusiasts, folding attic stairs fanatics, dirigible fanciers, soliloquy fiends,  junk junkies, lovers of lightbulbs, milk maniacs, World’s Fair nuts, suckers for jingles, impresario connoisseurs, and anyone who’s ever wondered if there’s an inventor living in their attic

What I saw on the way home: the ceiling of Grand Central Terminal, with its light-bulb constellations .