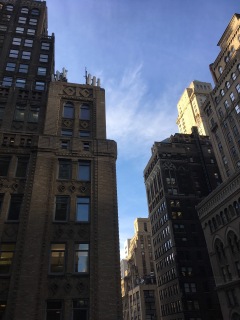 What I saw: “Sweet Charity,” at the Pershing Square Signature Center at 480 West 42nd, between 9th and 10th in Manhattan.

What I did beforehand: took the train into the city, checked into the Library Hotel at Madison Avenue and 41st, had tapas with R. 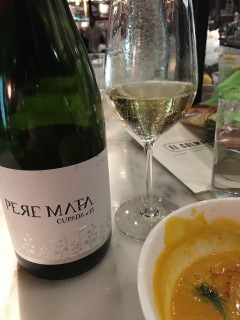 Who went with me: the Bacon Provider.
How I got tickets: online, a few weeks ago when I thought spending a night in the city a few days before Christmas would be fun and productive rather than inconvenient.
Why I saw this show: I impulsively subscribed to the New Group for the season. It makes me wonder about the existence of free will and the power of advertising.
Where I sat: Row D, Seat 10.

Things that were sad: this is another play about loneliness (my cousin recently pointed out elsewhere, “All plays are about being lonely.”). And not all musicals have tidy, happy endings, even ones from the 1960s.
Things that were funny: knowing so many of the songs but never knowing where they came from, the charming clumsiness of the main character, and realizing that this is the 5th show I’ve seen this year featuring people dancing in their underwear. Here are links to the other four.

Things that were not funny: the coincidence of having unintentionally reserved the New Media room at the Library Hotel was only kept from downright creepiness by the gentle absurdity of many of the books being, with predictions about the coming revolution and dominance of interactive television, just old enough to be hilariously inaccurate. The Bacon Provider wrote a book about digital disruption this year, in fact.

I am happy to recommend the Library Hotel, just about a block from Grand Central Station and the main branch of the New York Public Library, to book-lovers and anyone seeking a small, quiet boutique hotel in mid-town Manhattan.
Something I ate: butternut squash soup, pimientos, and pan con tomate at the tapas place in Gotham West, over in Hell’s Kitchen.
What it is: this musical is from 1966, and has been revived a number of times and was made into a movie in 1968. It manages not to serve a heaping helping of the nostalgic charm of a period piece and also not to be easily updated with modern seasonings. It is, nevertheless, a fine romp.

Who should see it: Fellini fans, students of mid-20th century gender studies, people who like to see actors dancing in their underwear.

What I saw on the way home: I think the pillow on our bed in the hotel room was meant to be fetchingly bookish. It seemed lonely and sad to me.