Skip to content
What I saw: “Vietgone,” a play with some songs, dancing and rap at the Manhattan Theater Club City Center Stage 1 on W 55th between 6th and 7th Avenues.
What I did beforehand: went to a German Xmas party at the apartment of  French friends where we admired the view, drank glühwein, and exchanged stories about near-accidents involving our children.

How I got tickets: online, very recently, since this plan was hatched only once I realized that the Bacon Provider would be on yet another international trip where he would lose two weekends–one getting there and the other getting back.
Why I saw this show: I read a review that said this show was an excellent companion piece to Viet Than Nguyen’s Pulitzer Prize winning novel, “The Sympathizer,” which I read on the recommendation of a woman who I sat down next to in a theater earlier this year because she was reading it on her phone and could barely put it down.

Went to another play about refugees tonight. A love story. About people. Because refugees are people.

Where I sat: A 108, or thereabouts. A woman next to us orchestrated a three-way trade so she could sit next to her husband, who had a seat in the same row. Everyone was more than happy to re-arrange themselves. 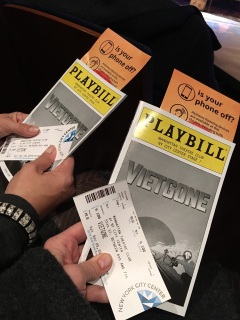 Things that were sad: the show closed 12/4/16.
Things that were funny: a character named “the playwright” starting the show by scolding the white audience for accepting racist portrayals of asians. Jokes about life in a refugee camp. A fight scene with slow-mo punches and ninjas. A dance number about wanting to have sex. More cussing than #ragecook burning dinner.
Things that were not funny: the two delicious lead actors had more chemistry than all the other couples that were supposed to be in love in all the plays I’ve seen this year put together.
Something I ate: German Xmas cookies.
What it is: a very funny, profane, slightly uneven, but lively and likable show with rap, singing, and some dance, running over two hours with a 15 minute intermission. This show features actors using contemporary slang to depict events in various locations in the U.S.and Saigon in the 1970s.
Who should see it: people who can tolerate not always being perfectly clear about when scenes take place.  Audiences that are prepared to revisit what the Vietnam War means as a metaphor.

What I saw on the way home: a buck with huge antlers on the shoulder of the Saw Mill Parkway, trotting in the direction of traffic.