Skip to content
What I did: lied at the dentist’s office.

What I did beforehand: took the train to Grand Central.

What I wore: jeans and sneakers.

Why I was there: 19 cracked a filling.

Where I sat: the lobby, watching one of those game shows where they ask people harder and harder multiple choice questions.


Godzilla brushes regularly, but lies to his dentist about flossing 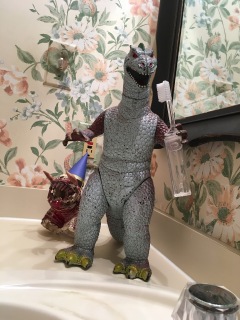 How I learned to lie: I was born honest, not knowing how to lie. Forbidden to touch my mother’s sewing machine, I sewed through my finger when I was 4, breaking the needle off and requiring stitches. Twice.

When I was 5, I stole a decorative cardinal from my mother’s craft supples and inserted the wire on its foot into the hole of an electrical wall socket; I found out what getting shocked feels like. My mother discovered me trying to wash away the terrible burning feeling, and I refused to tell her what happened. 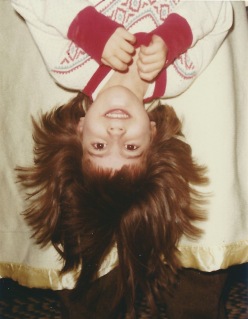 When I was 9, I was friends with the popular girls in my elementary school class, and my mother pointedly instructed me that if any of them ever ask me to do anything I wasn’t comfortable with, I could say that my mother wouldn’t let me.

Things that were sad: when I was 12, I was sent to a summer camp in Colorado where I went horse camping and did not learn to cinch my girth tight enough and the other girls were extravagantly mean to all newcomers, and if I had known enough to be a malingerer, I would have invented stomachaches. Conveniently, I did not have to invent stomachaches, for I spent days on end in the infirmary with diarrhea.

When I was 13, my family went to a friend’s cabin on a lake in Missouri and my brother and I exaggerated our experience with horses and talked the wranglers into giving us a string of sour trail horses to go ride unsupervised. One horse bolts back to the barn with the youngest of us. Mine bucked me off onto a gravel road. I got stitches but will always have rocks in my head.

When I was 15, my best friend B— who taught me all the right details about wearing preppy clothes– took real English riding lessons and wore a black velvet helmet and tan jodhpurs and I was so jealous I avoided speaking to her for seven years.

Things that were funny: When I was 17, I was late for French class several times a week because Excusez-moi, Monsieur Masson! Je suis tres désolée parce que je suis en retard. J’ai aidé mon amie Aimee à monter les escaliers. Or even, I am so sorry Mr. Masson, I have terrible cramps today. No matter what my excuse, he reddened, shook his jowly, understanding face and allowed it.

When I was 20, I talked my way into a summer job waiting tables at the Rosebud, promising that I would definitely, positively stay on through the next school year. I was terrible at waiting tables, forgetting orders, dropping huge trays of food, and crying. I made big tips and quit in August.

When I was 21, I wrote a fake-serious letter to a small brewery in Pennsylvania describing in hyperbolic terms a nearly-disastrous power outage saved only by a six-pack of their delicious cold beer. They sent me two cases, via their distributor, but upon arrival they almost did not give it to me because I did not appear to be of a legal age to drink. 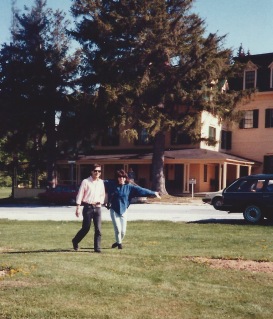 Things that were not funny: when I was 10, I breathlessly took strangers into my false confidences on a chair lift in Breckenridge, Colorado and said I was an accomplished gymnast hoping to make the U.S. Olympic team and almost never allowed to ski.

When I was 18, I worked for a family in Wellesley, Massachusetts doing light housework and caring for their young children in the afternoons. The more days they asked me to come, the more I grew to hate them; they gave me migraines. I quit abruptly, concocting a story I no longer remember.

Something I ate: when I was 11, I made decent money babysitting, passing the hours snooping in peoples’ drawers and tasting their food. I spent it on plastic model horses.

What it is: one of the receptionists at the dentist asked after my middle child. I might have had time to be honest if we hadn’t been walking out the door, but it was so awkward to tell the truth. “He’s fine,” said I, invisibly cringing at my laziness.

Who should lie: I got out of the practice of lying when I got married, though once we had kids I pretended to be both the tooth fairy and Santa.

I am imaginary. My tweets are all lies. Don’t follow me.

What I saw on the way home: more rain.