Skip to content
What I saw: the Saturday after Thanksgiving I thought it was Sunday.

I’ve lost track of what day it is

What I did beforehand: I set aside the Friday after Thanksgiving for doing anything that is not shopping.

I think I am better at shopping for my theoretical self than my actual self.

What I wore: riding clothes until after my lesson, when I changed into jeans.

Who went with me: the Bacon Provider. 19 was probably around but I didn’t see him.

My pets have left room for you, Tweeps, in case you want to come over pic.twitter.com/ljbiYTcCks

How I got two Sundays: I don’t always know what day it is

as usual, I’m not sure what day it is

Why I saw this show:  I’ve been distracted. We thought we lived in a democracy until we elected a woman and got an unqualified fraudster instead. When I show up at the barn, people ask me how I am, and I always say I’m doing great. I’m not doing great. I’m freaked out.

I don’t know what day it is, but the weather looks just like yesterday, so maybe it’s yesterday

Where I sat: car, horse, car, gas station, kitchen, living room
Things that were sad: last year at the time all the leaves were off the trees in our yard. This year, many still cling. In the arctic, it is winter when the polar ice cap should be growing and instead it is shrinking. We have caused a catastrophic global climate emergency and fixing it should be one of our highest priorities.
Also, Captain has deep feelings when people leave, and spends a day in a feelings chair.
Things that were funny: our houseguests played a lot of Boggle and though I played only briefly I found my sheet. Also, The Graduate’s roommate built a colossal tower of Plankos.

We finished the last of the beer we brewed in June. It was a traditional British single-malt IPA that we named Brexit. We messed it up when we bottled it, and it turned out tasty but flat. 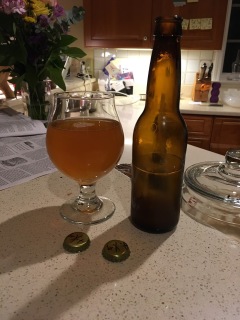 Schwartz has recovered from the rude dog at Thanksgiving and is back to dominating the household.

Things that were not funny: the proliferation of fake news is a popular new thing to talk about on social media. Does this mean we should assume that even the Washington Post “makes stuff up?” Also, someone lost half of the toilet-paper-roll-holder-thingy on Thanksgiving and it hasn’t turned up yet. 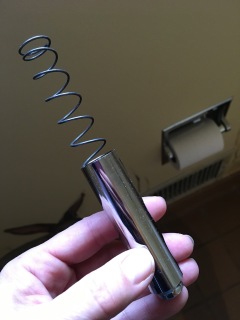 Something I ate: homemade turkey pot-pie

What it is: Sunday panic is the dread of going back to work on Monday, probably more related to the feeling that weekends aren’t long enough than that jobs are bad. Lately, the Bacon Provider had been traveling a lot, and too many trips have begun and ended on the weekends, so he’s lost some weekends altogether. I am trying to convince him that we need a vacation in January, and he doesn’t want to travel. Thinking it was Sunday on Saturday meant that I thought we were almost out of time.
Who should see it: keep your days straight, and don’t let Monday ruin your Sunday

It feels very Sunday-like right now, America, but it’s not. It’s Saturday. Keep it in mind. Don’t have two Sundays.

What I saw on the way home: my fuel light came on