Skip to content
What I saw: “Plenty,” a play at the Public Theater, 425 Lafayette Street in New York City
Who went with me: my friend B., who I met on Twitter, and I am happy that he’s moved back to NYC. 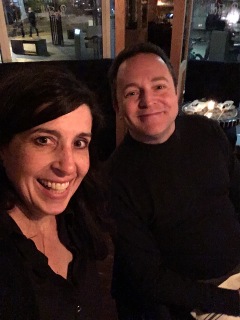 What I did beforehand: took the dogs on a potty-walk, fed the cat, drank green tea, went to pilates, ate some cottage cheese, said goodbye to the Bacon Provider, walked the hour-long trail with the dogs in the woods, continued vacation negotiations with the BP via text (because he travels for work, he only wants to spend vacations at home), showered, tried to dry my hair, gave up, got dressed, thought about how I’ve worn denim skirts with black tights and a black shirt since starting my first job teaching math at the University of Utah in the mid-eighties.
I bought a round-trip ticket at the vending machine and went to stand on the platform. It was cold enough that it was just me and a few crows. The rest of the passengers waited inside.

When the train came I had to do that quick grapevine dance step, sideways down the platform, looking for seats that face forward, and ended up in a window seat in a set of three rather than my preferred window seat in the sets of two. I had a momentary panic that I had forgotten to take my ticket out of the machine. But I found my ticket in time to get it punched. A young woman sat down next to me and spent a half an hour curling her eyelashes and putting on makeup.
What I wore: black tights that I bought in Barcelona that are as ill-fitting as they are long-lasting, black Fluevog boots with stacked heels, James jeans dark wash denim skirt, black Tanner belt,  black no-iron cotton fitted Brooks Brothers blouse, rag & bone gray scarf, silver bracelets, vintage earrings, black North Face hooded parka, American-made black drawstring leather bag.
How I got tickets: online, a while ago, and, for the record I put this evening on my husband’s work calendar but his demanding job made it so he had to leave a day earlier than originally planned. Do I sound bitter? Read on. Something happened that never would have happened with my discreet husband at my side.
Why I saw this show: I like the Public Theater.
Where I sat: front row, on the end, between my friend B. and a very old man who fell asleep in the first act and was startled awake by gunfire onstage.

Things that were sad: I get sad on the train. It passes through Chappaqua.
Things that were funny: no one writes a play without funny lines, and my friend B. laughed even louder and more frequently than I.
Things that were not funny: B.’s laughter fleetingly cracked up the male lead, played by the excellent Corey Stoll.
Other things that were funny: at curtain call, the beautiful and talented Rachel Weisz, star of this mad-woman’s-descent-drama, gestured at B. and me in our seats and thanked us, with a laugh and a gesture, “Love you guys.”
In the lobby, we were able to thank a number of cast members for their excellent performances. Everyone displayed grace and good humor.
Something I ate: banana cake with coffee ice cream and walnut crumble.
What it is:  a revival of an exciting play from the early eighties, featuring intrigue, smoking, gunfire, madness, and nudity, lasting two and a half hours with one 15 minute intermission.
Who should see it: any adult except anyone who thinks that all women are crazy.

What I saw on the way home: some of the stores in Katatonia are getting a jump on Christmas decorations.

My phone thinks it knows her pic.twitter.com/od0KiS24dp