Skip to content
What I saw: “Beautiful,” a biographical Broadway musical about the career of singer/songwriter Carole King, at the Stephen Sondheim Theater on the south side of West 43rd Street, between 6th Avenue and Broadway.
What I wore: Fluevog stacked heel boots, black infantilizing Eileen Fisher pants (no pockets), green floral blouse/dress with a drawstring and long, dangly ties to give it shape, gold and black scarf that I snagged from my mother’s closet before she was even dead, long black Patagonia rain coat that is nicely waterproof but not sophisticated enough in its fit and finish to feel like the right raincoat for New York City, fancy black Coach bag with cross-body strap.

What I did beforehand: riding lesson, shower, train, met a friend under the clock at Grand Central, walked up 5th Avenue in the drizzling rain, took the express elevator to the shoe department on the 8th floor at Saks, talked about my mother’s 41 pairs of size 6 navy blue pumps, sat at the bar and drank a glass of wine at Épicerie Boulud under the Plaza Hotel, had dinner at Sardi’s.

Who went with me: my old friend A., who I met in a Northern California beach town in 1992. I was introduced to A. by a friend of her sister-in-law with whom I’d struck up a conversation on the beach. “I think you’ll like her,” she said, sizing me up. She was right.
How I got tickets: I attended as A.’s guest.

Why I saw this show:  when you see about a show a week, and someone wants to join you, you let them choose. 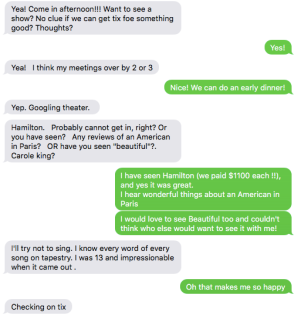 Where I sat: between my friend and a woman who was singing along tunelessly to all the songs toward the end of the show.

“I had no idea! I just thought it would be her singing!”
“She’s a Jewish girl from Brooklyn!”#Beautiful #Broadway

Things that were not funny:  the dangly ties on my shirt dropped into the toilet at Sardi’s, and there was a bathroom attendant, so I couldn’t rinse them in the sink without explaining it to the woman attendant in there turning on the faucets and handing out towels and I couldn’t bear to do it so I left them dangling wetly behind me. I gave her a dollar. She gave me a paper towel.
What it is: an enjoyable and well-constructed show for baby-boomers. Broadway musicals today all have fast-paced musical numbers with churning bodies and amplified singing. Some, like this one, manage to express some genuine human pathos in between the swelling strings and belted ballads.
Who should see it: anyone born before 1965. Fans of Carole King should not miss this show. Thoughtful Americans who spend too much time thinking about politics will find plot points and themes reminiscent of the life of Hillary Rodham Clinton.

“You know my husband is voting for Trump?”
“He gives my husband nightmares.”

What I saw on the way home: