Skip to content
What I saw: the 2016 New England Dressage Association Fall Festival of Dressage, a Level 5 USEF Competition, held at the HITS showgrounds, in Saugerties, New York.
What I wore: show attire, including a new, “nude” sports bra under my show whites, because my mother didn’t raise me to wear a colored bra under a white shirt. 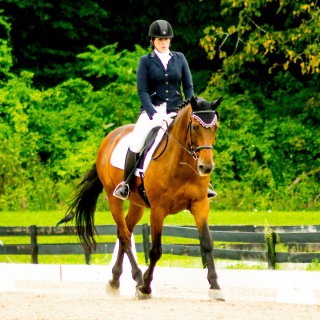 What I did beforehand: years of riding, months of practice, and four horse shows this summer, with particular attention to rides in qualifying tests in pursuit of two scores above 63% at two different shows from two different judges. I had, in fact, received five scores above 63%, at three shows, from four judges. However, due to a mis-communication, I did not enter in time to get on the schedule to compete in the final championship class for my level. I was able to enter the show late, and was able to add three other classes, two on Thursday and one on Saturday. Everyone encouraged me to try to add more classes on Friday and Sunday, because there are usually openings left when people scratch and go home early. But there were no scratches for the coveted spots in the championship class.
Who went with me: my new barn friends, who, along with my trainer, manage to demonstrate pride in their best rides without gloating, and show both a good-natured acceptance of their own mistakes in the ring and a sense of humor about their horses’ mistakes. I think this is what what sportsmanship is. I am glad to know S. and K. and B. and C., who each helped me stay focused on what’s important in this sport. I am grateful every day to have found my trainer, D.

How I ended up with five sparkly bun covers: I didn’t see my hair stuff when I was packing for the show, and when I arrived I realized I might not have the sparkly nets I wear over my hair in the back. I rifled through my stuff and did not see them. So I found one of the vendors at the show and bought a blue one and a black one to replace the lost ones, and a dark brown one because I hadn’t seen that color before. Then, later that night, when I was getting my suitcase out of my car, I found the helmet bag with the missing bun covers. I also found that I had a pair of rain pants but no raincoat with me.
Something about this show: last year at this time, I had plans to take my young horse Mars to this show. I’d had him about two years and we had come a long way together, starting with the early days where he’d try to run down the long side of the arena. Last year, Mars came up lame about a week before this show; I sent him to a rehab facility in New Jersey where he spent the next three months healing, doing daily water-treadmill and treadmill work. When he came back to work he was pretty wild, and the second time he bucked me off, I got a concussion. When I heard my friend P. was looking for a project, I sold him to her.

Currently not standing for the national anthem

Where I sat: I am binding my latest quilt, so I sat on a grassy hill to watch and did some stitching by hand.

I took this after I got sprayed by the water truck pic.twitter.com/yAXe9OqpsF

Things that were sad: my late entry meant I didn’t make it into the program. It also meant I could not compete on Friday. I stopped by the office a few times, looking for a spot, and they were pleasant and patient with me, but no spots emerged. I had a lesson and spent the day watching my friends.

Things that were funny/not funny: the HITS showgrounds has two buildings with actual flush toilets and running-water sinks, but sometimes the walk is too far (especially right before you get on your horse). So, there are Port-a-Potties. I have a rule about Port-a-Potties that goes like this: if you are someplace where you are going to have to use the Port-a-Potty more than once, you pick one and keep using it. My theory is that you get the major horrors over with on the first visit, and fresh horrors are at least in the context of already processed ones. I chose the middle one. It was a random choice. It was no worse than any other I’ve seen at horse shows this summer. I tried not to touch anything, as you do. When everything was zipped back up and tucked back in, I went to unlatch the door. It’s not a complicated latch on a Port-a-Potty, just a simple sliding plastic latch to hold the door shut and spin the dial on the door to show the Port-a-Potty is occupied.  But I couldn’t make it budge.
My first thought was: that I didn’t want to die in a Port-a-Potty. Not, I might get stuck in here, or How will I get out? Straight to I don’t want to die in there.   No food, no water. Trapped in a hot plastic portable john. Death by exposure to scary blue liquid and a mountain of other peoples’ crap.
Things that were better than dying in a Port-a-Potty: when I persuaded the latch to slide, I stepped into the crisp air of early autumn and brilliant sunshine and was animated with the prickly skin and heightened attention of an adrenaline surge. And I had a pretty decent lesson on my horse. It’s so good to be alive.

What it is: after I rode on Saturday I stopped by the show office to see if there had been any scratches for Sunday. There hadn’t. But the patient women in the show office who now knew what I wanted without my asking again said it would be OK to check back with them again, and I did, six more times on Saturday and twice on Sunday morning. Finally, on Sunday morning as the training level last class began without me securing a ride time, I gave in to the tears I’d been fighting on and off the whole show. I had had a great first full season, and I did not want to end it with feelings of disappointment. I found my trainer and thanked him and told him I wanted to go home.
http://schwartzville.tumblr.com/post/150872878817/the-horse-is-named-bojing

Who should see it: about thirty minutes into the drive home I got a message on The Facebook from a friend who said they were adding adult amateurs to that training level class. I didn’t see the message until I arrived home about an hour after that.
Would I have turned back? I don’t know. I might have. I think that there is a parallel space-time continuum where all the happy things we promote about ourselves on The Facebook are true and predominant, and here in Our Reality it’s almost like our good news doesn’t matter at all. But in that parallel universe, I rode in that class, and I broke 70%. Why not?

What I saw on the way home: there were dead baby raccoons on the shoulder of I-84, one after the other, and the Lusitania was torpedoed by U-boat 20 in the audiobook I was reading. I surprised my husband in the kitchen. He was packing for his next business trip, and wasn’t sure he’d see me before he left. It was good to spend a couple of hours with him. On The Facebook, I saw that Mars won his first event with his new owner on the strength of his dressage score. If luck in this life is a zero-sum game, I’m satisfied mine got apportioned that way this weekend, because someone should get to have a happy ending.

While I was gone, deer came and ate all the potted green tomatoes and most of the leaves as well. I guess it’s time for mums.