What I saw:  “Men on Boats”  at the Playwright’s Horizons Theater, off-Broadway on the south side of West 42nd Street, between 9th and 10th (not to be confused with the Signature Theater a closer to 10th Avenue on West 42nd on the same side of the street, where I showed up and confused the house manager, who had not even heard of “Men on Boats,” but did encourage me to come back and see “Small Mouth Sounds,” which I’ve read good things about but might not have time to see before it closes).

Actually
I just walked into the WRONG THEATER #jackass

So by being absurdly early I have to sit in the lobby with these sleeves!

What I wore: stupid sleeves, white jeans, smirk, mascara, damp hair crammed into falling-down ponytail, Puma sneakers that are scuffed in a way that shows off my bunions, little purple Kate Spade purse for my glasses, wallet and keys, white cotton cabled poncho that I bought from a vendor at the horse show last weekend.

I have had a significant theater-going wardrobe revelation, and it is the PONCHO

What I did beforehand: noodles and beer, cappuccino and cookie.

Who went with me: 127 strangers, who arrived after me, every one.

How I got tickets: online for either $40 or $45 (when I got to will call, all they had under my name was a receipt for $40 and a receipt for $45 but no ticket, so they had to print one. And in my flusterment, I discovered that I what been walking around with the top button of my blouse undone, so, really, maybe it wasn’t just the sleeves that were the embarrassment).
Why I saw this show: the cast’s first names, in alphabetical order, are Birgit, Danaya, Danielle, Donetta, Elizabeth, Hannah, Jocelyn, Kelly, Kristen, and Layla. 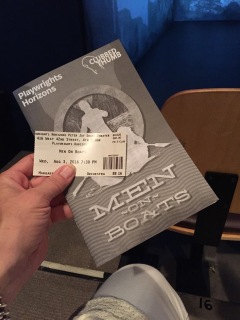 Where I sat: Row BB, seat 16 (second row, on the end). The theater was chilled to 2° K. Good thing I had my poncho!
Things that were sad: I try to see a show every week, and one of the arbitrary, unwritten rules I have for this regular undertaking is that I do not research things before I see them. I believe that art should always be self-explanatory. It means I sometimes see a play about Einstein, when I am totally done with Einstein-as-a-metaphor. However, when I sat down and discovered that this play is about John Wesley Powell and his exploration of the canyons of the American West, I realized that I should have invited The Graduate, who did a NOLS course canyoneering in the Rockies. Alas.

Things that were funny/not funny: I believe most Shakespeare productions would be improved as claymation movies, of course, just as operas should all be performed by marionettes, and while I enjoyed all the very funny female performers in this play, I longed to see it cast entirely with children. I would have even accepted the substitution of “Shoot!” for every one of the utterances of “Shit!”
What it is: A mostly funny play, in one act, about adventurers, with dialog that mixes contemporary vernacular with a smattering of the highfalutin lingua franca of the late 19th century white American explorer.

Who should see it: canyoneers, boaters, adventurers, fans of the recent Ghostbusters, Americans, and bacon lovers.
What I saw on the way home: three children, walking without an adult down West 42nd in the dark, clapping an improvised rhythm of their own invention.