Skip to content
What I saw: though Alice chased a rabbit and fell down a hole, and Dorothy rode in on a twister, and Wendy flew with Peter, thinking happy thoughts, and Lucy found it at the back of the wardrobe behind the fur coats. One day, I went to my make-believe world, the magical land of a horse show, and all I had to do was take the wheel of my car. It was not an interesting drive. I crossed over the Hudson River, and I didn’t even try to see the river itself, so big and so far and so flat, down below the deck of the bridge.

What I wore: same as last time, with a different pin.
What I did beforehand: just as I pulled into the mysterious town of Saugerties, I glanced into the back seat of my car and noticed my purse wasn’t there. Somehow, though, I had my wallet and both pairs of glasses, and all my show clothes for the next day. So I  thought it might turn out ok. The only thing, though, was a thing I knew was important: without my purse, I was missing was my migraine medication, which was going to be wearing off at 8 p.m. This is a panic-inducing situation for a migraine-sufferer. I am not immune to panic-inducements. Even in the land of the impossible.
Who went with me: someone I know, but not very well, is a licensed medical professional (i.e., sorceress), with the rights and abilities to call in my prescription to the local pharmacy. Her incantation required three or four phone calls, and the recitation of several spells, consisting of long strings of numerical digits. She was a kind and patient sorceress, and seemed unbothered by my request, coming out of the blue as it did. I tried to express my gratitude, but my fear of failure may have rendered me inarticulate.
When I arrived at the pharmacy to pick it up, a testy cashier redirected me to the drop-off window. At the drop-off window I was told that they didn’t have any of the medication I take. They were willing to call another nearby pharmacy (which was surprising, because the last time this happened to me, I was in New York City, and they would not call other pharmacies to see if they had medication in stock, but I was in the mysterious land of Saugerties, you see, where everything is a little bit different). I was informed (in a tone that emphasized that the situation was entirely my fault) that since I’d recently filled this prescription: I’d be paying $398 for four pills. I thanked the pharmacist, and went to a front register, where I bought some sun-blocking lip-balm and a small bottle of Aleve® .
I did not make any further attempt to fill the prescription. Alice was threatened by the red Queen. Dorothy wouldn’t get the Wizard’s help without the witch’s broom. Lucy faced the White Witch. Wendy was captured by pirates.  I would not get my pills. I would do without.

How I got there: I-684 N, I-84 W, I-87 N.
Why I forgot my pills: I was leaving, and The Bacon Provider offered to help me carry my many, small, lightweight bags to the car; I found this irritating. After my peevish rebuttal, I did not go back and check and that I left my purse sitting on a chair in the kitchen. But I should have.
Where I sat: on my horse, and in a chair with my last name on it.

Things that were sad: I went in the ring and did the easier test with Hado sneezing and feeling stiffer than I would have liked. At least I got him straight on the centerline at the beginning and end, though. That was the comment I’d seen on my judge’s sheet from the day before: that we were crooked. So it was my goal to be really straight on the centerline. As I did my test, everyone else went to watch a very nice man named B, who rides at a much higher level than I do, and is widely admired for it, and for being so nice, so when I finished there was no one to say how they thought it went. Everyone else said how well B’s test had gone. 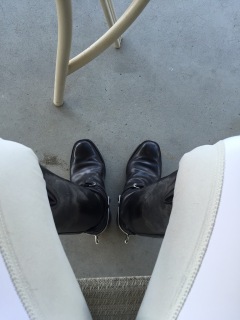 Things that were funny: later, someone congratulated me for winning a class, which I did not believe, but when I went to the show office to check, it turns out I had. Also, I was ok without the pills.

Things that were not funny: I was sitting with B when someone else went by with her shiny, shiny gray stallion. We all noticed how very shiny he was, and another person commented that it was the “stallion gleam.”
I replied, “I guess the testosterone does more than just infuse the individual with an hyper-inflated sense of self-worth.”
And B said, “Ouch.”
Then, we went to lunch. I ate a grilled cheese, like the overgrown child that I am.
What it is: According to Merriam-Webster’s full definition,  a fairy tale is
“a story (as for children) involving fantastic forces and beings (as fairies, wizards, and goblins),” or “a story in which improbable events lead to a happy ending,” or “a made-up story usually designed to mislead.”
Who should see it: Once upon a time, many years ago, my friend K inherited her mother’s cat, Tuffy and it had terrible allergies and I thought it was hilarious. A cat, that’s allergic, to everything! Ha ha ha ha ha!  Poor Tuffy got a daily dose of children’s Benadryl, and wheezed and sneezed and blew snot bubbles out his nose. I think of snuffly Tuffy and my rotten lack of sympathy for him every time we have to change my horse’s medication, or get a note from the veterinarian to go to the show. Because my horse suffers terribly from seasonal allergies, and we almost didn’t go to this show at all. What was I talking about? Oh, yes. Horse shows. Don’t go to horse shows. Stick with cats.

What I saw on the way home: on the bridge over the Hudson River, I caught up to and passed the homeward-bound trailer with my horse on it. 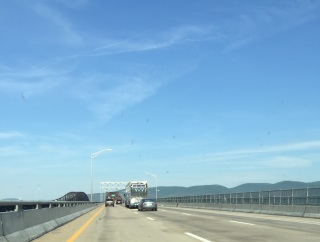