Skip to content
What I saw: “Toast,” a play, from the British playwright Richard Bean, at 59 East 59th Street, in New York, part of the Brits Off Broadway series.
What I wore: James jeans, gray Puma sneakers, black Eileen Fisher tank top, gray trees-and-rabbits print Steven Alan blouse that I enjoy wearing even though the fabric is scratchy,  gray cardigan with snaps, rag & bone scarf, no coat because it was just that nice out.

I may regret this at midnight, but right now it feels like it’s going to save my life. #coffee pic.twitter.com/etdisTbdgB

What I did beforehand: my plan was to take the E, uptown, and meet the Bacon Provider for a little dinner beforehand. There were more confused people crowded around the ticket kiosks than I care to describe, so I employed a flanking maneuver; this resulted in my standing behind a woman who couldn’t add $50 to her subway ticket despite four tries. She gave up, warning me that the machine wasn’t working.  It worked for me. But I got off the subway at the wrong spot, and we were 30 minutes late to our reservation, and somehow, the staff at Aquavit still got us through a superlative three course meal with drinks and amuse bouche in 45 minutes without acting a bit rushed.
Who went with me: a lot of old people, and one young guy with Starbursts.
How I got tickets: online, a few days in advance. 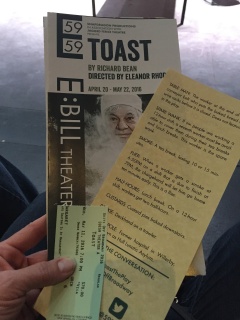 Why I saw this show: email spam described it as robust and funny (and offered 10% off).
Where I sat: Row A, seat 6, between the youngest member of the audience, who was eating only red Starbursts, and a man who looked somewhat like Henry Kissinger, though sleepy and in jeans.

Things that were sad: Henry Kissinger fell asleep in the front row. At intermission, he complained, “It’s six months until the election! Six months!”

That thing where the guy next to you looks like Henry Kissinger and also keeps falling asleep pic.twitter.com/K0h3PbupQn

Things that were funny: this play is set in Hull, which is in the northern part of England and east of Manchester. The performer’s accents were particularly difficult to understand in the beginning, what with the funny vernacular of the workplace, and the odd turns of phrase of Yorkshire. Some characters are easier to understand than others, and certainly the best character in the show uttered mostly monosyllabic grunts. Careful, patient listeners will get into the groove of it quickly, as careful staging ensures some physical comedy as well.
Things that were not funny: Some of the audience was quietly griping at intermission that they couldn’t understand the dialog. I think they could; I think they were worried they were missing something, or their companions were missing something. No one said, “Hey, I don’t understand what’s happening.” I
What it is: a play, set in the break room of a bread-baking factory, performed in two acts, with one intermission. I felt some pride in recognizing the accent, and having heard of Hull (the Housemartin’s 1986 album, “London 0, Hull 4,” was one of my favorite cassettes, back in the mid-80s). The acting (and casting) was flawless. The script is well-structured and correctly paced. The second act is the strongest I’ve seen on Broadway this year. With nearly perfect lighting and sound design, the set itself is grim and disgusting and contributes in its humble, passive way to the hilarity.

Who should not see it: gluten intolerant people, or anyone who requires at least one Trump joke.

What I saw on the way home: lawyers and other human-shaped objects. 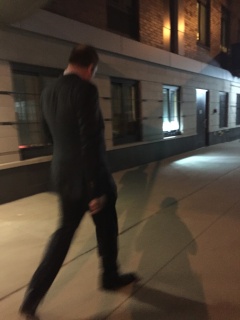