What I saw: Mike Birbiglia’s “Thank God for Jokes” at the Lynn Redgrave Theater, 45 Bleecker Street in NoHo, NYC

my phone just made an alarming noise and flashed what I read as, “THANK GOD FOR JESUS” at me

What I wore: pale purple Eileen Fisher long-sleeve jersey top that is starting to seem too small; long, sleeveless Vince cardigan that is ombre-dyed purple at the top and black at the bottom and it came with this stretchy elastic belt that fits into tiny belt loops that place it right up under my boobs and so obviously I’ve never worn it with the belt and honestly where is that belt anyway; favorite SkarGorn Thorn slouchy jeans that I bought in San Francisco back when I thought we were moving to California; Danner belt, real dangly purple titanium earrings that were a gift from my mother in the 80s; Dubarry boots that I bought at a horseshow at Thunderbird in Langley, B.C. in the early 2000s from an Irish salesperson who was standing in a tub of water to demonstrate the water-proofing. Someone asked me to take a selfie and I tried but I looked like an asshole in both attempts. 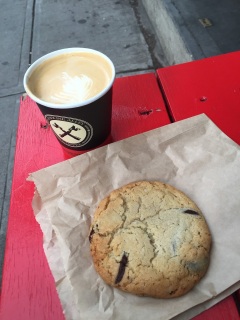 What I did beforehand: drove to the city, and did not almost get run off the Saw Mill Parkway by a white SUV, NY license number CMP-27** that tried to do that on Wednesday. Took the 7 from the new station at 34th St. to the downtown 6. Got coffee at Gasoline Alley. Sat on a bench and watched people do NoHo.

Who went with me: my friend, who I’ve known 18 years, and her new-ish girlfriend, who is so much better than the sum of the parade of crummy boyfriends she had over the years that I almost don’t want to say anything about it here.

How I got tickets: online, full price, though my guests paid for dinner afterward at Siggy’s on Elizabeth Street 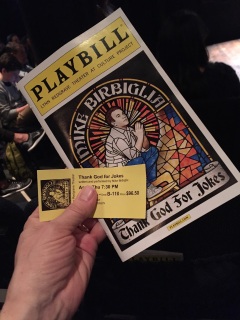 Why I saw this show: because Mike Birbiglia is funny, and I heard that Ben Stiller and Nathan Lane liked this show, too.

Where I sat: third row, with empty seats in front of me. Those no-shows missed out big time.

Things that were sad: When Mike Birbiglia asked the audience if anyone had ever been arrested, a guy in the front row said he was, for “hurting someone.” Mike pursued the story’s details, and revealed that someone kicked the guy’s dog on the street in Chelsea, and both Mike and the audience thought he was sort of a hero for “hurting someone.” Then, it turned out a cop saw it, handcuffed him (which is why he said he got arrested), put him in the NYPD cruiser, drove around the corner and let him go. The guy was white, of course.

Things that were funny: all 80 minutes

I laughed my ass off at #thankgodforjokes last night. I’m pretty sure @birbigs was distracted by my friend & me. Laughing our asses off.

Things that were not funny: whether the toilets in the ladies room were actually going to successfully flush was an issue of some stress for the lady-people using them. Also, I told a story at dinner afterwards about a pair of $410 red Italian sneakers that I found online and because the Bacon Provider had joined us for dinner, he is now trying to convince me to get them.

What it is: an absolutely solid hour and a half of conversational stand-up, woven into stories from Mike B’s life

Who should see it: fans of Twitter, fans of Mike Birbiglia, people who went to Catholic school who can tolerate a little bit of cussing, Mike’s mom

What I saw on the way home: we had dinner at Siggy’s around the corner, and were the last to leave. The subway stop nearby had a sign about nighttime uptown closures, requiring riders to catch a downtown train and switch and that seemed way more complicated than catching a cab. So we took a cab, and I was carsick. 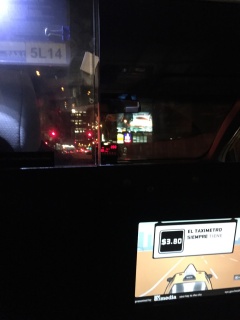