Skip to content
What I saw: Matilda
What I wore: boots, tights, a denim skirt, and mascara that ran in the rain
What I did beforehand: ate the candy I found in my purse (I jacked it from someone’s office when I visited last week)
Who went with me: about a thousand strangers, some with children
How I got tickets: online, full price

Why I saw this show: while my favorite Roald Dahl book now is “Danny, Champion of the World,” when I was a kid I read “Charlie and the Chocolate Factory” over and over. I would start at bedtime, knowing I could not stop reading until all the golden tickets had been found. I read many positive things about “Matilda” as a show, specifically the music and production. I agree that the music is much, much better than typical successful Broadway shows, and the production is exciting and engaging. Matilda is one of Dahl’s darker books, with many cruelties inflicted on the main character and her classmates.
Where I sat: Row G, center, on the aisle. I met people who’d come from Philadelphia by train and barely made it on time, and a woman and her daughter from Hawaii. The ushers made efforts in the run-up to curtain telling people to move their coats and tuck away their bags, sometimes revisiting the same people with new issues. Indeed, the actors run into the audience frequently, and I reflexively tucked my feet under me as they ran past. I wondered a number of times how hard it would be to trip them.
Things that were sad: Matilda is emotionally abused by her parents at home and her headmaster at school. The bullies are buffoonish, and their insults are delivered for laughs. The “good ending” involves a lot of nasty revenge.
Things that were funny: there are a lot of zingers in this very funny show. Early on, Matilda’s selfish mother defensively screeches, “Dinners don’t microwave themselves!!” The woman next to me snorted with laughter at almost everything uttered by the character of Miss Trunchbull, broadly over-acted by the hilarious scene-stealer, Christopher Sieber; as it happens, the woman from Hawaii and I kept setting each other off with peals and snorts of more laughter.
Things that were not funny: I got clocked in the head by a leg or arm just as the funny line, “Dinners don’t microwave themselves!!” was delivered. I gather that the restless child behind me was being passed from the lap of one parent to the other. There were many children in the audience, not all of them quiet. Wine and candy were offered beforehand and at intermission, and the Skittles were $5.

What it is: a very, very good musical. Songs and dancing are truly superlative. Regrettably shouty, though, which seems to be a Broadway thing. I thought the accents were uneven, contributing to diction problems, especially from the large cast of otherwise amazing kids, and it was particularly distracting in the opening number. I realize that Roald Dahl was English but I’ve always thought of him as an American writer. The accents seem unnecessary.
Who should see it: Wannabe Wednesday Addamses, Sally of Halloween Town, anyone who appreciates a weird and wonderfully wicked story, people who can tolerate the ruinous quality of over-amplified singing. I would like to see it again, and next time get a souvenir cup of wine.
What I saw on the way home: a menacing number of NYPD marching up the bike lane on 8th Avenue, looking for all the world like drunken sports fans making their way to their cars, staggering away from the stadium where they just witnessed the disappointment of a tie game. 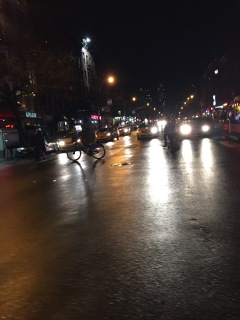