I was heading out of the barn on a trail ride in July when I found out I was moving.
“P. says you’re moving!” said L., the charming boyfriend of one of the other boarders at the barn.
I was confused. P. owns the barn, and is my landlord. It stands to reason that he’d be in a position to know if I was moving.
I stopped my horse, and said, “Uh…well…uh…actually, my husband did get a new job. But it’s in New York.”
L. smiled warmly. “So, you’re not moving?”
“No,” I said. “We will certainly be here through the end of our lease in October.”
As I headed out into the bright July sunshine to walk the property, I wondered how this misunderstanding had come about.  I frankly felt grateful to L. for asking. But, who told P. we were leaving? Did I say something that was misunderstood?

Ten or thirteen years ago, when I was at a horse show, I was walking back from the show ring to the temporary stabling for my barn. It was sunny and bright, and a little dark inside the big tent. Another one of the riders from my barn, seeing both my trainer and me walking up, waited for me to disappear down the next barn aisle so he could ask my trainer how I did.
His query seemed as loud as if he were standing nearby. I was miffed. I felt then (and still feel) like this person wanted to know about me without bothering to know me. Like he collected friends so he could make trades in the currency of gossip. As I hung up my bridle and groomed my horse, I reconsidered whether this person was really my friend at all.
Barns foster odd social interactions. There are the staff, who do the hardest work and serve long hours.  There are the owners, who are sometimes very accomplished riders themselves. In the interest of maintaining their business, some trainers become close friends and confidantes with their paying clients, while other trainers seem more like haughty professors.  I’ve witnessed a couple screaming matches at barns (trainer at client, client at client, trainer at staff), a bona fide diva storm-out, affairs, and down and dirty competitive sabotage. I’ve made close, life-long friends who I will stand by forever. I don’t think the swirl of gossip is unique to barns at all. 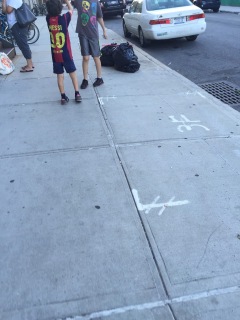 The first time I recall hearing a bit of devastating gossip was when I was in first grade and someone said that D.’s mother had died. He’d been my best friend in pre-school and kindergarten, and we used to do a lot of things with their family. I hadn’t known his mom was dying, and had to pretend I did. I felt so ashamed to hear it at school instead of from my parents that I never asked them about it.  We hadn’t seen them in a long time. Was that why?

On a day in October of my 11th grade year, we showed up for school and were sent to a large study hall to spend the morning taking a standardized test. I was very good at standardized tests as a child, but had more recently discovered that I was behind in specific math skills, like long division, that shook my confidence in myself as a smart person. But this test was a complete surprise. I was delighted to find that I actually had two Number 2 pencils, sharp and ready to go, and took my place next to D. and dug in. I must have assumed it was akin to the Stanford Achievement Tests we took in the cafeteria every year in elementary school. We never knew how we did on those, and they didn’t show up on our report cards. I liked filling in the bubbles and progressing through the questions and remember finishing early and drawing mice in the test booklet.
The test on that October school day turned out to be the PSAT. I had taken it in a state of complete relaxation, with no regard to whether it mattered. When we got the scores a few weeks later, I had little to no understanding of what my scores or even the percentiles meant. That night, when I got home from play practice, I told my mother about my scores and she already knew.
In fact, my mother had gotten a call from the mother of G., and G. wasn’t even a friend of mine. G.’s mother was all excited because I’d done well on the PSAT. What assumptions about my abilities as a student was G.’s mother making, and why? And why did G.’s mother know my scores? I didn’t carry a backpack and probably folded the scores and stuffed them into the back pocket of my corduroys. Had I dropped them?
I spent the next eight years of my life secretly measuring my intelligence against others, and viewed with suspicion any inquiries into my grades or test scores. I assumed no good could come from people knowing I was smart, and studied in noisy student lounges, legs and arms sprawled over the arms of a chair, instead of the library.