Skip to content
Hamster’s Note: This is a story for children and related persons who enjoy stories about cats and dogs and made up monsters. The story includes no cuss words. There are opportunities for listeners to make quiet and loud noise. Readers will find brief fighting (with consequences), but no characters are eaten or killed.

Gomzilla vs. The Captain and Schwartz

Long ago, there were the three Persons of Pewter: Peter Pewter, Petra Pewter, and Persona Pewter. They took their spaceship, the Emptaprys, to the Far Away Planet, and faced a one-eyed dragon.
The one-eyed dragon thought Peter, Petra and Persona looked very crunchy in their pewter armor, and went off to find some marshmallow trees.

But Gomzilla, who lived on the Far Away Planet, and was first cousin to a much larger, more famous and more destructive monster, noticed that no one was guarding the space ship, the Emptaprys. So, she stole it and travelled back to the Planet Earth, where two pets live. The pets are known as The Captain and Schwartz.

Both The Captain (the dog) and Schwartz (the cat) like to take naps, and that is what they were doing when the sky turned red and the spaceship Emptaprys landed nearby. Out from the spaceship lumbered tiny Gomzilla (you can make lumbering noises now).

Now, even though The Captain is a silly dog and sometimes tries to run through screen doors because he didn’t notice they weren’t open, this time he did notice Gomzilla lumbering around the house.
As Gomzilla drew closer, The Captain gave her a big sniff (you can make sniffing noises now). 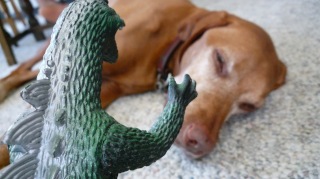 The Captain likes almost everything and almost everybody, and a small monster with green scales and sharp teeth seemed annoying and a little boring, so he went to sleep without being bothered (you can make snoring noises now). 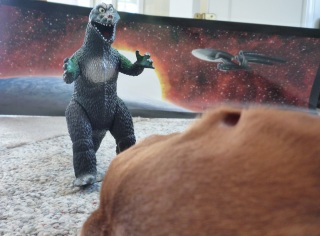 Gomzilla was surprised that The Captain didn’t want to stay and fight or run away.
But The Captain was not the only pet Gomzilla would meet that day. Gomzilla turned around and there was a fluffy, black beast!
Now, Schwartz knew he was just a cat, but Gomzilla was from a Far Away Planet where there are no cats. 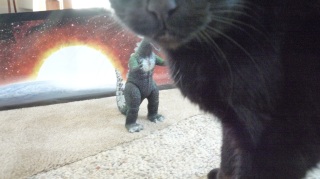 Gomzilla thought Schwartz would be a better beast to sneak up on, so she began to sneak  (you can make sneaking noises now).
And, fast as lightning, Schwartz was ready to fight! (If you are careful, you can make fighting noises now, but no actual fighting because you don’t want to miss the end of the story.)
Gomzilla narrowly missed being bitten, and fell over.

She was very far from her home on the Far Away Planet, and fighting with beasts wasn’t very much fun any more. Gomzilla felt sad.
Schwartz gave Gomzilla a bandage, and Gomzilla said thank you, and began to feel better.
And they decided to be friends.

3 thoughts on “Gomzilla vs. The Captain and Schwartz”