Skip to content
Cathedrals take a long time to build. The Basilica of the Sagrada Familia has been under construction since 1882.

We went to see it yesterday. I knew I was headed the right way, but my Traveling Companion did not trust me, and insisted that I demonstrate my knowledge. I caught a glimpse of the construction cranes as we headed roughly north/north-east along Carrer de Provença, and somehow talked my way out of having to prove it.
You can look at pictures of this cathedral online, but I promise that they will never do justice to seeing it in person. Even though you’ll stand in line for a while, spend 12€ (cash) just to walk around, and more if you want to go up in the towers, it is worth it to see the way space is enclosed, to see how sculptural forms climb from the stone,  and the experience the scale of it. You enter at the Passion Façade, completed since 1988, and marvel at terrifying knights and a crucified Jesus hanging by his shoulders.  On the other side, there is the Nativity Façade, where animals and angels emerge from a cloud-like chaos, which looks like a sand-castle in photographs, a crispy jumble of shapes, with none of the actual energy and beauty easily seen in person.  Best of all, you might be inside when they play the organ, as we were. Inside, giant columns soar up to knots of splendid mathematical shapes and then to a ceiling that is like a giant forest canopy. It is incredibly beautiful. 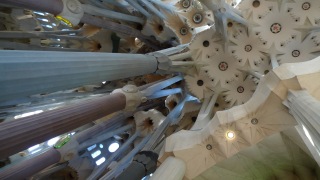 Gaudí died in 1926, after 42 years of work designing and building the basilica. He saw only one tower finished. Anarchists in the Spanish Civil War destroyed the beautiful little school (which has been re-built) and most of the models and plans for the cathedral, and the work on the cathedral has continued anyway. As for me, I hope to come back in ten years to see more stained glass and maybe the beginnings of the Glory Façade, which Gaudí intended to portray Death, Judgment, descent into Hell and then Glory.