Skip to content
At $4.69 for 24 sheets, they are not cheap. On the other hand, 20¢ a load is quite a bit cheaper than replacing a load of ruined t-shirts and socks. 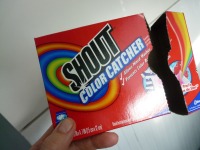 The simple fact of this product is that you throw it in with your wash, and any errant dyes released by the laundry process are trapped in the sheet.  Instead of dying your undies pink when your son’s red t-shirt from China (that never seems to be done releasing red dye at every wash temperature even after two years) sticks to the walls of the washer and pollutes the whites, nothing happens.   I also use one to wash a quilt the first time, because you never know what fabrics may run.
This product goes against many of my principles, being single-use, disposable, and mysterious. S.C. Johnson, “A Family Company” never misses the chance to share this motto with you. Are they making some sort of claim to “family values?” “Family values” are espoused by political candidates representing a particular kind of conservative view that is anti-gay, anti-women’s rights, and anti-religions-other-than-their-kind.  Nevertheless, S.C. Johnson is on its fifth generation of leadership by Johnson family members.  That’s what they mean by “A Family Company.”  Privately held, they have a PAC which funds a mix of mostly to Republican candidates (but some Democrats, too).  S.C. Johnson makes a number of things made out of scary sounding plastic (low density polyethylene) and a bunch of gruesome household chemicals that you pour down the drain. The Shout Color Catcher Sheet box says “Cloth made in Ireland,” but lists no ingredients.  I attempted to use a search engine to learn more on the internet, but all I was able to determine was that the sheets are “cellulose.”
I decided to call the S. C. Johnson & Sons question and comment line (a number listed on the box).   After a single brief menu of options, I found myself speaking to a real person right away.
After describing my question, I was told the product is a “specially treated cellulose sheet,” and that it was designed to use “minimal chemicals” so that it attracts dies in the wash.  I was advised to consult two web-based resources, whatsinsideSCJohnson.com and shoutitout.com.  Then I was asked repeatedly if I wanted some coupons, which I declined, and then asked for my name and my address and my phone number and my email.  I might have made up a phone number, maybe.
Both web sites are colorful and easy to use, reflecting the clean and bright packaging of their products.  If you hover over the drop-down menu of brands, it’s like a list of everything under a typical American’s kitchen sink: Drano, Glade, Pledge, Saran, Scrubbing Bubbles, Shout, Ziploc.  I learned that the Shout Color Catcher Sheet is a “specially treated cellulose sheet,” a definition you can click on to learn, “Our Specially Treated Cellulose Sheet is a cloth-like sheet that is processed so it will absorb loose dyes in the wash. It is designed to not break down in the wash, but instead retain its cloth form and keep the loose dyes contained.”
It has been my experience that the Shout Color Catcher Sheet works as advertised. I am not sure what to think about companies that bury ingredient information on their web sites, rather than including it on the box.  What are they assuming about their customers and potential customers? That most of us don’t care? That those of us who do care have excellent reading skills and internet access? S. C. Johnson & Sons, as a privately held company, is not required to publish its financial data, as are most of its publicly held competitors, like Procter & Gamble.  Do we assume that what we don’t know can’t hurt us?