We left Seattle last Friday afternoon, before the movers were done.  My husband and youngest son stayed behind to supervise and fly out in the morning.  We made it to Spokane in time for a late dinner. The next night we were in Billings, Montana, and the night after that Mitchell, South Dakota.  We stopped for the night in Joliet, Illinois and last of all, Jamestown, New York. 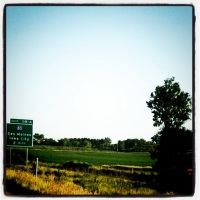 We followed a few rules:
1. Don’t drive more than five hours per driver per day if you’re going for more than a couple of days. Otherwise you will get too tired.  Sleep 8 hours or more at night, without setting alarms or having early wake-up pressures.
2. Get a really engaging audio book, a long one. Unabridged. The good ones are read by the author or someone super talented. We listened to Catch-22, read by Jay O. Sanders. There was a problem with the packaging, so there was glue on many of the disks, which caused skipping, but it almost didn’t matter.  We listened to both of the last two Harry Potter books on long car trips when the kids were younger, and they always made the miles fly by.
3. Eat the best food you can find. Be flexible. Our best meal was at The Pub in Jamestown, New York. It was full of locals watching the Yankees demolish the Indians on TV. We felt conspicuous walking in, but sat down anyway. Our waitress suggested the chicken salad, which was home-made and better than any chicken salad I’ve ever had. Really.
4. Call ahead to hotels and be honest about how many pets you have and be clear about how big your trailer is. They will help you figure out parking, and they will charge you the minimum pet charge. Staff will also admire your knuckle-headed dogs even when they spazz out in the lobby, and you will sleep better knowing that your knuckle-headed dog who is barking in his sleep is at least not giving you away. 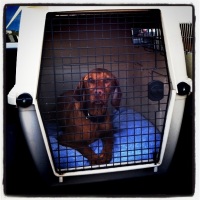 5. Whenever possible, pets should ride in crates. Schwartz pooped in his within Seattle city limits, before we even made it to the freeway. We cleaned it out and he still screamed for a better part of the first day, but after a dip in the hotel room sink and a night of exploring the hotel room while everyone else slept, he was ready to go the next day. He now goes in his kennel without any trouble at all and only meows en route if we meow at him first. His appetite was off for a few days, but we made sure he had access to plenty of food and water at night and he arrived in the best shape of any of us.
6. One of my biggest fears was that the dogs would wake up in the night and poop in the hotel room. We had limited ability to walk the dogs at all, and their potty breaks were brief and often alongside a busy street. After a day or two, they were both making one large poop morning and night after only the briefest of walks.  We tried not to leave the dogs in hotel rooms while we ate dinner, in many cases because it was forbidden.  They barked at people in restaurant parking lots, which was never good, but in five nights of hotels, we had no accidents.