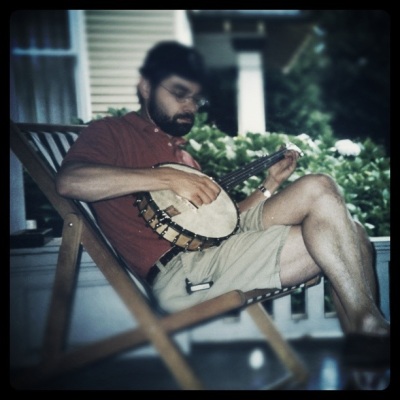 Once when my kids were very little, I pulled in to the full-serve gas station for a fill-up.  A baby was sleeping in the back of the mini-van, and I didn’t want to get gas on my hands. I was listening to a local public radio station that played folk music in the daytime. They played a Pete Seeger tune, so I didn’t shut off the radio while the fellow filled the tank.
I have been listening to Pete Seeger for so long that I can’t say how long. I credit him with teaching me to sing at least twenty songs and probably more. My husband taught himself to play banjo, using his book “How to Play Five-String Banjo.” My youngest son’s middle name is Peter, given to him in honor of Pete Seeger.  Pete Seeger’s songs are folk songs, protest songs, work songs, and songs for children. He made other peoples’ songs famous, and his songs were made famous by others. If you ever had the privilege of seeing him live, you were exhorted to sing along. I certainly hope you did.
They played a second Pete Seeger tune while I paid and drove away, and a third song began while I sat at the stop light. I began to cry, believing that the only reason a radio station would play three Pete Seeger songs in a row was because he had died. When the DJ finally came on to name the songs, he wished Pete Seeger a happy birthday, because he was 81.
Today, eleven years later, Pete Seeger is 92.