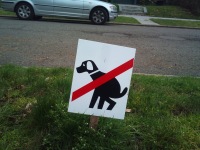 There is fresh dog-doo in my front yard.  It is close enough to the sidewalk that it might have been deposited there by a dog on a leash.  Given what I have seen of the white dogs that live two houses down and across the street, I will assume this poo was not deposited by a supervised dog.  This brings me to the subject of the sign across the street.
The sign itself is smaller than a sheet of notebook paper. It is mounted on a stick so that it rises just a few inches above the grass. It is wordless. Wordless signs are excellent for very small children and international travellers, but are no more meaningful for dogs than signs with words. Only the most vivid imagination would lead a person to think a sign could discourage a dog from pooping on that particular grassy spot. Furthermore, the presence of something unusual on this patch of lawn might even increase the odds that a dog linger there and add a few new drops of pee before moving on.

Assuming this is a rational neighbor, we can only guess that he believes the person walking the dog would see the sign and intervene before the dog defecates in that spot. For some dogs, a simple tug might communicate the message “this is not where you should poop.” For other dogs, a simple tug, a furious yank, a loud scream and full body tackle would not interrupt the imminent arrival of dog doo. Sled dogs can actually relieve themselves at a dead run.
Another set of signs on another street adorn the bushes of the parking strip. On one end is a water-damaged laminated card attached by a wire twist-tie encouraging dog owners to have their dogs pee elsewhere, with, “PLEASE: NO PEE IT KILLS US! THANKS!” At the other end of the bushes is a matching sign, and behind it hangs the weather-faded head of a Dora the Explorer piñata.  Dora’s face has another warning attached: “PLEASE NO PEE! IT KILLS PLANTS.”

I have met the owner of this home. She claims that she has a dog, although I haven’t seen it. She clearly does not understand that a male dog will urinate on almost everything outdoors that is lower than the height of his pelvis, and that once any dog has dropped even a few drops of urine in that spot, every other dog will similarly leave his calling card there as well. Adding signs may actually only serve to slow down the human holding the leash, encouraging a larger than normal deposit.
In both cases, these homeowners live on desirable streets of beautiful classic older homes. In both cases the homeowners are frustrated by what dogs can do to their plants. In the case of the woman with the piñata head hanging in front of her house, I think she has more problems than an ailing boxwood hedge. In the case of the homeowner across the street from me, I think he can take down his sign and go have a word with the his next-door neighbor.  This neighbor owns a small white dog that is seen regularly out on the block, no leash or human in sight.