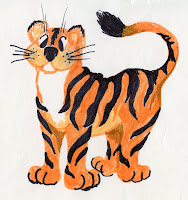 A good friend once had the misfortune to overhear a mutual acquaintance refer to me as “The Tiger.” It could have been worse, like “The Badger.” I hear badgers are fierce when cornered, willing to fight off much bigger predators, but short-legged and heavy-set. Or “She-Bear.” That too would have been pretty bad. At least a tiger has stripes, and is strong and powerful, and eats people. My statistics professor in business school once explained to the class why men have longer limbs than women by saying, “Short men eaten by TIGER!” It’s in my notes; I wrote it down.

I felt bad for my friend who overheard it, because she was really puzzled if she should tell me. I decided that a real tiger does not care what you call it. I bought three different tiger t-shirts, so if asked I could explain that someone gave me a nickname.    No one really ever asked, and I like my tiger shirts.
“Quartz” is something my mother’s father called my older brother–not all the time, but sometimes. I like the sound of “Quartz.” We called him “Grandpa,” but referred to him as “Grandpa Nuss” to distinguish him from the other “Grandpa.” “Grandpa Nuss” mostly called me “Maggles” and sometimes “Magpie” and even “My Mugwump,” a favorite.  My older brother always called me “Margaret,” and was for many years the only person who called me “Margaret,” even though it is my given name. He relented when he heard my kids call me “Maggie.” Every once in a while someone will ask me why my children all call me “Maggie” and not “Mom,” “Mother,” or something. This is a hard question for me to answer. The truth, which might be boring, is that my oldest child was very smart and very talkative at an early age and simply called me what he heard others call me. From there, the younger ones do as their brother does. Some people seem to see it as a sign of disrespect, or rebellion, or even anarchy.  If it bothered me, I would have needed to fix it about 19 years ago. If my children calling me by my first name is a sign of the coming end of civilization, I guess I’m sorry about bringing the end of civilization. I didn’t mean to.
I called my mother “Mom.” I still think of her as “Mom.” My mother called her mother “Mother,” and her father “Daddy,” all the way to the end of her life. As a unit, her parents were “Mother and Daddy.” (Yes, I know.) She called her grandparents “Mamo” and “Pam.” I did not realize that “Mamo” and “Pam” were not their real names until I was an adult.
My father’s father called him “Robin,” and I think it suited him. He was busy, and funny. Robins sometimes eat so many honeysuckle berries they become intoxicated. They also eat worms. Dad appreciated a low-fat source of protein, and moderately-priced white wine.
My youngest son is called “Gus,” short for Gustav, which I sometimes still pronounce “Goose.” The neighbors two doors down have a small white dog named Gustavo, and when they call him they say, “Goose,” or even “Goose-Goose.”  The neighbors directly across the street from them also have a small white dog, named Angus. They call him “Gus,” and sometimes “Gus-Gus.” I have opinions about naming a pet with a person’s name, but I will save them for another day.