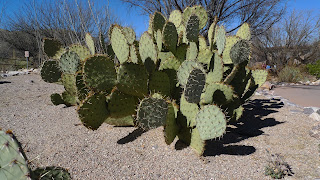 While in Tucson, we visited the Kartchner Caverns. This Arizona State Park is about an hour from Tucson, and requires a reservation in advance for either of two tours. Everything about Kartchner Caverns is interesting to me. The caves were discovered by a couple of University of Arizona undergraduates out looking for an undiscovered cave.   Because caves can and have been ruined by people poking their noses into them, the discoverers kept their find a secret for many years. Eventually, they found that the caves are on what was then privately-owned land. They contacted the owner, who was receptive and excited to reward them for their discovery. Working with the Nature Conservancy they managed to gain the support of Governor Bruce Babbitt and the folks at the state parks department. But it took an act of the Arizona state legislature to make it possible for the financing of the cave’s visitor center and access. Cracking open the earth to reveal the cave would have killed it, dramatically changing the humidity and temperature of the fragile underground environment.

Today, if you wish to visit this natural wonder, you need to call or make reservations online.  While we were able to reserve a spot only a day in advance, tours often sell out. Waiting for our tour to start, we struck up a conversation with a pair of retired women in our group, one of whom was in a wheelchair. We discussed how we heard about the tour, and how we got our tickets. “Did you buy yours online?” they asked.
I said that we had. “Oh,” one said. “We would have had to go to the library to do that, and we always get so caught up checking our email.” 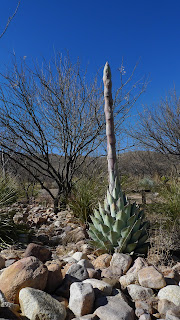 During our trip to Tucson, my son and I had been taking turns using the 3G-enabled iPad and the Panasonic Toughbook. He found typing on the iPad to be “really annoying,” though I didn’t. We used up a lot of data using the iPad as a navigator, and actually had to buy another 2 GB, but we did a better job of conserving our resources on the second purchase. Apple and AT&T make it very easy to buy more data, having provided a pay-as-you-go model with two tiers of prices. My conclusion from the trip was that I would have been fine with the iPad alone. Of course, I have been a big fan of this form-factor since the Ultra-Mobile PC days, and only recently got rid of my first generation Samsung Q1.  To me, the iPad is an over-grown smartphone, but so much friendlier to middle-aged fingers and middle-aged eyes.  If I had had the iPad with me, I might have given the ladies on the cave tour a demo, just to see what they think. I believe they are not the only people out there who are computer-literate, but lack a PC and an internet connection. That iPad comes with a seamlessly simple user interface, and human face-to-face help at the Genius Bar.

When they were developing the Kartchner Caverns, the head of the Arizona State Parks insisted that the tours be wheel-chair accessible. This stipulation caused a delay of at least a year and a half, and certainly added to the cost of development.  It was obvious to me every step of the tour that the ramps were well-laid out, and certainly better than steps would have been.  Thoughtful design always wins in my book.