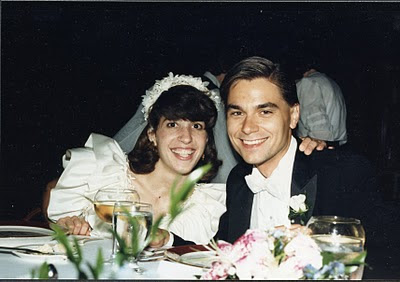 The summer that I was getting married, I spent a few weeks at my parents’ house in St. Louis, having my dress fittings, tasting cakes and lying in the sun.  I brought my two cats with me, and they stayed with my parents while we were on our honeymoon.

The house I grew up in was built in 1929. It is brick, with a slate roof, plaster walls, and oak floors. The bathrooms had all the original tile and enameled cast-iron fixtures. The basement had its original asbestos covered heat pipes serving the radiators. Summer in St. Louis means air-conditioning, all day, every day, and our old house had yet to get central air. Growing up, we slept with the windows wide and the attic fan on, wiping down our arms and legs with a wet washcloth to cool off enough to go to sleep. Later, we got window-unit ACs, and I cranked mine to the coldest setting I could get, even if it meant having to sleep in a sweatshirt. Once you adjusted to the noise of it, the AC created a zone of privacy; you kept your door closed and the shades drawn.
I had both of my cats with me, in my room, so they did not disturb Sugar, the cat of the house. It seemed they could not get into any trouble this way. One night, the black and white tuxedo cat found her way into the plumbing access panel in the back of my closet. This panel was perhaps intended to be fastened to the wall, but had been simply propped there for all the years that it was my room. Once inside the wall, the cat ventured further in, ending up about ten or twelve feet away in the floor of my room. In the morning I could hear her calling.  You could also hear her calling from inside the living room ceiling.
I do not actually remember being hysterical about the cat being trapped in the wall. My brother says I was, and I believe him.  My point of conflict centered around the fact that my mother would not commit to ripping up the floorboards.  I threatened to call off the wedding. While I do not recall saying this, I trust my brother’s memory, and agree that it sounds like something I would have said when I was 23.
Mom and her handyman were sure the cat would find its way out. I was sure it would die there, create a stink, and the floor would need to be ripped up anyway. After about 30 hours, the cat appeared, close to dawn, unrecognizably black from head to toe. I gave her a bath, restoring her to white and black, whereupon she was attacked by the other cat; he no longer recognized her smell. My solution was to also bathe the attacking cat, to level the score anyway.

1 thought on “The Cat in the Ceiling”