Skip to content
There is a children’s book called “Six-Dinner Sid” about a black cat that lives in a neighborhood where he convinces every household that he needs to be fed. Soon, there are consequences for Sid, who gets very fat and then gets sick, but thanks to some advocacy and improved communication, all is well in the end.
I am a big fan of children’s books, from picture books to first novels. Up until I became an actual adult I really thought writing children’s books was what I was meant to do with my life. Well, maybe that or be a veterinarian. Regular visitors to this blog will be familiar with “Things I find in my Basement,” and most of that is what is left from ten or so years of unfinished efforts to write stories for children. I am certain that some first drafts should never see the light of day, but a car that travels through space and takes you to a planet run by apples might be something worth revisiting.
I mention Six-Dinner Sid because our Schwartz, who might have modeled for Sid, loves routine as much as any house cat, and got into the routine of asking for kibble from every adult who frequented our house. When the boys were younger, we always employed at least one young woman to help with carpool, dishes and laundry, dog-walking, and homework supervising. Over the years we had excellent luck finding good babysitters, and one thing they all have had in common is a good relationship with our pets.  Schwartz makes the most of any situation, and managed to ask for breakfast from my husband, and then from me, and then from the babysitter, and so on. Each of us was filling his bowl to the top at least once a day. After a number of months of this, we found he weighed 17 pounds. 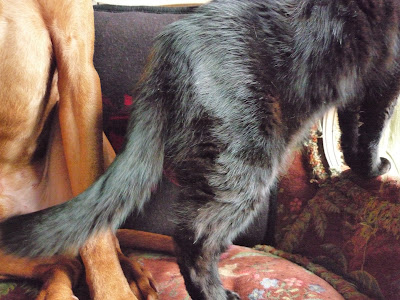 But Schwartz is a large cat, so we didn’t think much of it, until one day when Schwartz had to go for a long car ride. Like many house cats, Schwartz finds riding in the car traumatic. He howls and screams, and panics violently every few minutes. Even though the vet’s office is only about eight blocks away, he usually poops in the carrier on the way there. Longer trips mean he poops, pees, has diarrhea, and barfs. So after a long car ride, Schwartz needed a bath.
I have had cats since I was 5 or 6. I know how to cut their nails without losing blood, I know how to dose a cat with a pill, and I know how to give a cat a bath. That having been said, I also know that cats really don’t need baths very often, and I would only give a cat a bath that really, really needed one. After a long car ride, Schwartz needs a bath.
Isn’t a wet cat a pitiful thing? Part of a cat’s charm is certainly its fluffiness. Take that away, and add a pissed-off attitude, and you have a wet cat. With its fur clinging to its form, a cat is sleek and angular. I lifted wet Schwartz out of the water to dry him and noticed that his tail still looked fat. I put him back in the water, submerged his tail, and took him out again (mind you, we’re not talking about dunking a doll in water–we’re talking 17 pounds of furious predator). The tail was still fat. I felt it. It was wet.
It was then that the truth really sank in: Schwartz was so fat, his tail was fat. He was so fat his tail looked dry when he was wet. His next bag of kibble was the low-fat, indoor adult type. I also changed the scoop we use to a 1/3 cup measuring cup. Now, Schwartz can have four scoops of food a day, and he can have them one at a time. He maintains 14 to 15 pounds on this regimen, and he still thinks he is getting what he asks for.