Skip to content
My very first blog entry mentions a monstrous suitcase I bought to take to Italy. This monster, along with the even larger red suitcase I bought just before bags were assessed extra fees when they were overweight, were filled with an extraordinary amount of clothing and flown with my youngest son and me to Tucson, Arizona. 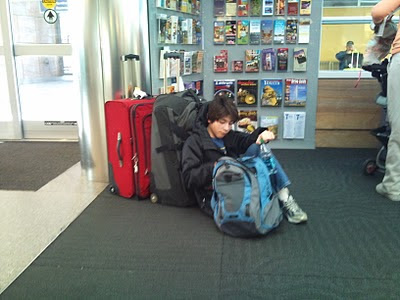 As before, the pets were worried when they saw the suitcases. I don’t know why they worry so much; my husband spoils them all with table scraps whenever he feeds them.
Tucson has been in the news a lot lately. On January 8, U.S. Representative Gabrielle Giffords was shot, and bunch of local people killed during a meet-and-greet in a shopping mall here.  The shooter is in jail, Giffords is in rehab, and President Obama made a moving speech.  There is a lot to talk about: gun-control, how we care for the mentally ill, civil discourse in politics, medical insurance woes of some victims. And then there is Tucson.  Pottery shards found in the area indicate that people have been living here for as long as perhaps twelvethousand years.  Civilizations have come and gone. Before Arizona was a state it was a territory. Before that, it was part of Mexico. Apaches attacked the Spanish Jesuit missions here. Before the Jesuits, the Pimas were settled here, and before the Pimas it was the Hohokam people. My youngest son looks around, seeing the sand and the cacti and the scrubby plants, and asks “Why would anyone want to live here?”