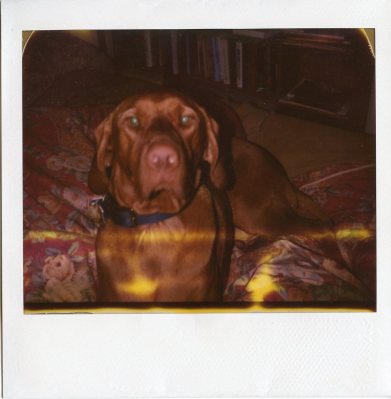 Pluto bolted his food. We tried kibble, which he seemed to suck into his mouth and swallow in four chews. We tried canned food, which we carefully spread to the edges of his dish, and he seemed to suck it into his mouth and swallow in one motion. In the end, we found that adding hot water to his food made him slow down and savor it in six or eight mouthfuls.
He willingly ate any food, and even things that seemed like food, like PlayDo, modeling clay, crayons, and scented soap. Often, we would not discover that he’d eaten something until it came out the other end. Crayons and modeling clay pass through a dog with color and texture intact. Expensive scented soap turns into a massive, grey mucous-covered substance that makes me ill to think about.
Pluto loved beer, and barked when beer was opened until he was given a small amount in his dish. He also loved broccoli, so much so that he clamored for the water the broccoli was cooked in—what we called broccoli water. Broccoli water was usually still hot, and would elicit growling sounds from the dog, head down in a big saucepan. You could amplify the sound, and vary the pitch by poking him in the ribs while he drank it. Our current Vizslas do not understand why we sometimes absent-mindedly offer them the pot of broccoli water.
Once, at the end of a big family meal, my brother asked me whether he could give Pluto the ear of corn left over from his young daughter’s nibbling.  I had a charming mental image of a dog quietly gnawing the ear while he steadied it between the paws. I thought it was a great idea. Sure! Give Pluto the ear of corn. Pluto swallowed it in two or three bites.
It took a few days, but the corn cobs needed to be barfed up, since they would not break down and come out the normal route.

1 thought on “A Pluto Story: Corn on the Cob, and Other Eating Disasters”