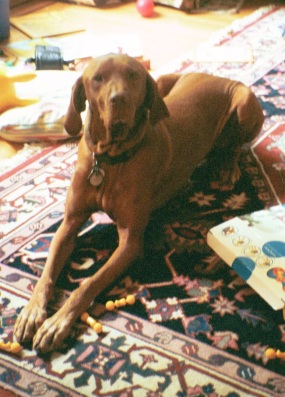 Every Vizsla we have ever owned has known that a dog needs to sit under the right spot at the dining room table to maximize his chances of getting a dropped floret of broccoli, an errant piece of bread or any offerings of uneaten gristly meat bits.  Pluto was well-trained enough not to beg at the table, but he always chose someone at a big family meal and lay down at their feet under the table. Typically, he chose the youngest person in the room, because he was a very smart dog. Sometimes, though, he chose a guest, probably because he suspected they might just slip him something.

Pluto’s general attitude about the world was that it was awesome and that all people were awesome.  He brought the ball to strangers at the park so they could have a chance to throw it for him. He visited each of our immediate neighbors’ houses at least once, barging in uninvited and rushing upstairs to sample their toilet water.   When he was only 6 months old, he knocked my mother over the very first time he met her.
I don’t remember exactly who it was, but I think it was a friend of my brother’s.  Maybe she was even the guest of a friend of my brother’s. As I recall she wore pretty nice shoes. At some point during dinner, Pluto had produced a huge heaping mound of vomit under the table. The guest, sitting in Pluto’s chosen dinner spot, had been just short enough to swing her feet. I clearly recall that it was much easier to clean her shoes than to clean the carpet.
On more than one occasion, Pluto caught a nasty case of giardia. He was our very first dog, and gave us so many opportunities to learn about new things.  Giardia is a flagellated protozoan parasite thought to be transmitted to dogs when they drink contaminated water.  Pluto slept in a crate at night, and one morning we woke up to a crate filled with the foulest smelling diarrhea we had yet encountered.  The puzzle of trying to clean up a struggling-to-be-free, diarrhea-covered dog or restrain him somehow until the kennel was cleaned was solved by closing him into a bathroom.  The prospect of cleaning the dog (and then the bathroom) was nothing compared to climbing into the dog kennel filled with an inch of liquid dog diarrhea.
The final disgusting tale I have to tell explains why one of Pluto’s ears came to be two inches shorter than the other. I think I will tell it tomorrow.