When the trains in Italy break down and you are stuck with a carload of Italians, they like to hypothesize about what has happened to the train, what might be happening to fix it, and when they’ve finished with discussing it amongst themselves, they use their cell phones to call whoever is waiting for them. I was viewed with suspicion, being unable to participate in any of these exchanges.
I did make it to Rome in plenty of time to find my hotel and wander around, but after an early dinner (which is against all the rules), I headed back to my hotel only to get turned around at dusk, whereupon there was thunder and lightning and torrential rain. In the end I found the hotel again and was asleep by 8:30. 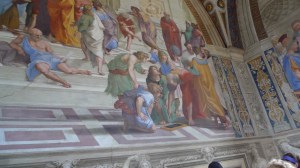 The next day, I went to the Vatican to see a fresco by Raphael. There were other things to see along the way, like the Sisteen Chapel and a lot of headless marble statuary, but I had this one thing in mind: “The School of Athens.”

2 thoughts on “Lost in Rome”